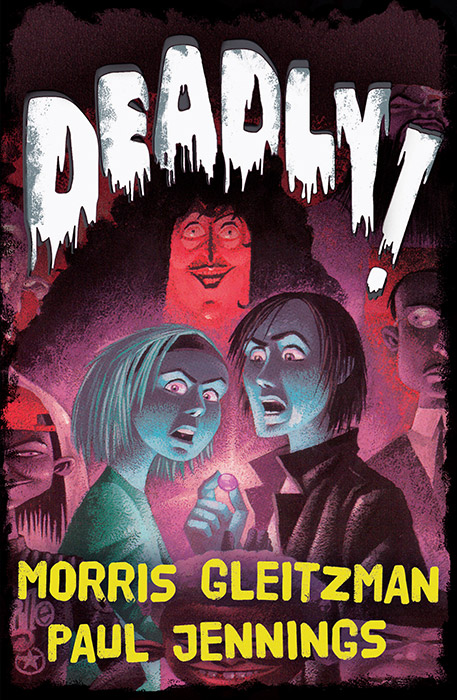 Mum tried really hard not to lose her temper on my birthday, but in the end she just couldn’t help it.

‘Where is your father?’ she yelled, slamming the kettle down onto the kitchen table so hard all the cutlery jumped. ‘What is he doing? He’s been gone an hour and thirteen minutes. It’s only a ten-minute trip.’

It wasn’t just the cutlery that jumped. The walkman Mum and Dad gave me for my birthday jumped too. Right off the end of the table onto the floor.

A couple of bits of plastic snapped off.

I was pretty upset, but it wasn’t Mum’s fault. She’d had a really unhappy childhood. That can make you a pretty angry person. And a bit jealous when someone else is having a happy birthday. I’d seen it happen when kids at school had birthdays.

Plus I knew Mum was really stressed about Dad.

I looked at her angry, unhappy face and that’s when I decided to do it.

What I should have done years before.

Get it out in the open. The reason he was always disappearing on us.

Before I could even rehearse how I was going to do it, the back door flew open and Dad hurried in. ‘Sorry,’ he said, dumping a bag of take-away food containers on the table.

Dad looked at her sheepishly. ‘I know what you’re thinking,’ he said. ‘You’re thinking I could have walked there on my hands in that time and hopped back carrying those pancakes on my head.’ Dad put his hand on his bald patch. ‘Which I could have done,’ he said to me with a rueful grin, ‘when I still had hair.’ He gave Mum a nervous glance. ‘I had to drop into work. Sorry.’

That’s when I should have done it.

I should have looked him in the eye, or rather his steamed-up glasses, and said, ‘Dad, I know you’re having an affair with another woman.’

I took a deep breath and opened my mouth to say it. But before I could, Dad completely took the wind out of my sails.

He reached into his jacket pocket and handed me a birthday present. Another one.

‘Happy birthday, Princess,’ he said, and kissed me on the cheek.

‘Thanks, Dad,’ I stammered. I gave him a peck back. He was grinning at me expectantly. I tore off the paper.

It was a Swiss Army knife.

I needed a moment to pull myself together, partly because it was the biggest Swiss Army knife I’d ever seen, and partly because if I’d known I was getting a separate present from Dad, I’d have asked for a book token. So I could get Mum and Dad a book. How to Repair Your Marriage After an Affair.

‘It’s got twenty-seven implements,’ said Dad enthusiastically. ‘You’ll be able to help all sorts of people with that.’

That’s my dad. He loves helping people. Twenty-seven times if they let him.

Except for quite a while now he’s been helping himself. To another woman.

‘Thanks, Dad,’ I said again, quietly.

Now, I said to myself, say it now.

But before I could, Mum cut in. ‘Work,’ she said bitterly. And she gave Dad one of her looks.

I’ll say this for Dad, he didn’t flinch. When Mum gives me one of her looks, my guts turn to soggy cauliflower.

‘If work’s more important than your own daughter’s birthday,’ Mum’s look to Dad said, ‘why don’t you move in there?’

When three people have been together as long as me and Mum and Dad, you don’t always need words. Sometimes looks are enough.

Mum glanced disdainfully at the Swiss Army knife. ‘Don’t you think Amelia’s a bit old for a penknife?’ she said to Dad.

I started to explain that it was more of a tool set than a penknife, but I didn’t finish. Mum was looking even angrier than usual.

‘Life’s an adventure,’ protested Dad, picking up the Swiss Army knife and pulling out an implement that looked like it was for removing kidney stones from small mammals. ‘Amy can’t get out there and explore life without the right tools.’

Mum didn’t even answer him. She turned to me. ‘Start on your cheese and asparagus pancakes, Princess,’ she said. ‘I’ll go and mend your walkman.’

‘Please, Mum,’ I said. ‘Leave it till later. Let’s just all have our pancakes together.’

Suddenly Mum put her arms round me. I was startled because she hadn’t done that for a while. It felt good.

‘I just need a moment to calm down,’ she said quietly. ‘So I don’t forget myself and kill your father on your birthday. I’ll be fine when I’ve had a cup of tea.’

She grabbed the bits of walkman and went upstairs.

I had to get the repair work started.

Now was my chance.

I took another deep breath.

It was only ten twenty-five. I was born at ten thirty-two, so my birthday didn’t really start for another seven minutes.

I could still keep the vow I’d made to myself. To confront Dad before another year of my life started. Another year of worry and sleepless nights and feeling sick half the time.

All I had to do was look at him across the kitchen table and say it.

‘I know there’s another woman,’ I’d say. ‘All those nights you come in late and think I’m asleep and creep into my room to give me a kiss, you pong of her perfume. You’re just lucky Mum eats so much garlic or she’d smell it too.’

By now he’d probably be pale with shock, but I wouldn’t stop.

‘I know why you’re doing it,’ I’d continue. ‘You think Mum doesn’t love you any more. Well, she does. We both do. Mum can’t help being a grouch. You know she had an unhappy childhood. Stop it, Dad. Give this other woman the flick. Come back to us.’

I knew every word of it off by heart. I’d rehearsed it under the bedcovers a million times. And now the moment had come to say it.

I took several deep breaths, gulped down some orange juice and cleared my throat.

He looked up from the deli box, a cheese and asparagus pancake wobbling on the fish slice in his hand. I cleared my throat again.

I couldn’t do it. The words wouldn’t come.

I don’t know why. Maybe it was because he looked so anxious and stressed and tired. Maybe I was worried that when Mum found out she’d kill him with the fish slice. Maybe I was a born coward.

If I’d been braver, maybe I could have stopped that day turning into a nightmare.

Maybe I wouldn’t have ended up staggering down the street with my life in tatters.

The fact was, I couldn’t say ninety simple little words.

Instead, Dad put the cheese and asparagus pancake on my plate and sighed. ‘Listen, Princess,’ he said. ‘I know it’s your birthday and I wish I didn’t have to, but I’ve got to pop back into work and do a few chores and improve the state of civilisation as we know it. Sorry.’

But it wasn’t OK. It was Saturday. The vegie factory was closed for the weekend, and that included Dad’s plant genetics laboratory.

He’d lied to me again.

We ate our pancakes in silence.

‘When I get back this afternoon,’ said Dad suddenly, ‘we’ll have a birthday tea. With a surprise.’

How, I thought miserably, can a highly educated scientist who’s responsible for the health of most of the tomatoes, peas and carrots in this part of the state be so bad at observing stuff?

Mum was just as bad. She was studying ancient history. It was a really hard course, specially doing it off the Internet. How could a person as intelligent as her not have noticed what was going on with Dad? She might have been good at ancient history, but she was really dumb at recent history.

‘What have you got planned this morning?’ asked Dad.

‘I’m meeting some friends in town,’ I mumbled.

I didn’t like lying on my birthday, but Dad had lied to me enough, so I didn’t feel too bad.

I tried to smile but I couldn’t.

‘Dad,’ I wanted to say, ‘for the last five years I’ve been at a boarding school three hundred kilometres away. I’m only in town for a few weeks each year. How could I have any friends here?’

Upstairs I could hear Mum running a bath, so I didn’t wait around for my walkman. Mum’s baths could go on for hours.

Dad was in his bedroom when I yelled goodbye. Even from the bottom of the stairs I could see he was changing into one of his best jackets. The one with leather patches on the elbows that Mum reckoned made him look like a nerd.

‘See you at your birthday tea,’ he yelled.

I didn’t answer. I was going to be seeing him before that.

After I slammed the front door, I crept over to the carport, opened Dad’s car, released the boot catch, climbed into the boot and closed the lid.

I lay in the darkness, smelling the rubber of the spare tyre and listening to my heart thump and having an awful feeling that this birthday wasn’t going to be a happy one.

Then I heard Dad get into the car and start the engine and I felt us reversing out of the driveway.

I’d never been so scared and miserable.

There’s a thing kids at boarding school do when they feel scared and miserable, which is quite often. They close their eyes and pretend they’re someone who’s even worse off than them.

I did that in the boot as I bumped along the road.

Even that didn’t work.

Deadly! is available in bookshops and libraries in Australia, New Zealand, the UK, and online:

The audio track on this page is an excerpt from the Bolinda Audiobook Deadly!, read by Francis Greenslade & Melissa Eccleston. Buy it online: