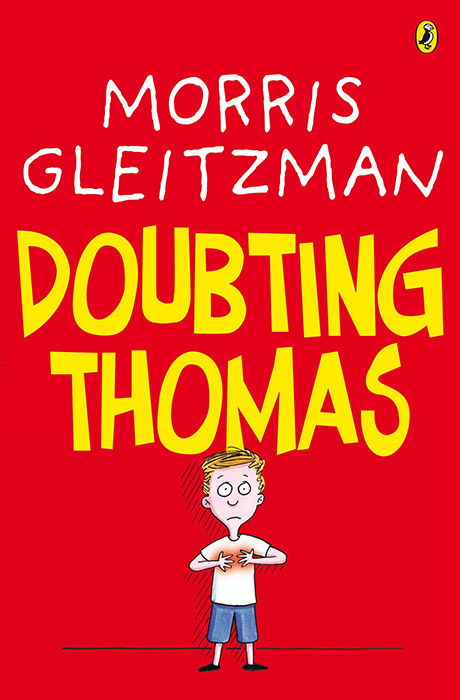 Thomas sat in the doctor’s waiting room, trying not to panic about his arm.

It wasn’t looking good. A red stain was seeping through the bandage.

Oops, thought Thomas. I think I used too much jam.

Lucky there weren’t any other patients in the waiting room.

Thomas gave the bandage a couple of prods. More jam leaked out.

He glanced at Alisha to see if she’d noticed that his arm was looking less like a stab wound and more like an after-school snack.

She was busy texting.

That’s one good thing about big sisters, thought Thomas. They only notice their mobiles.

‘You might as well take that stupid bandage off,’ said Alisha, not looking up from her phone. ‘That fake injury’s not fooling me and it won’t fool the doctor.’

That was the bad thing about big sisters. Even when they failed year ten science, they still thought they were medical experts.

‘What do you mean, fake injury?’ he said. ‘I told you, I stabbed myself with the fruit knife trying to open a box of Cheezels. If you hadn’t got home from school when you did, I could be dead by now.’

He should have known he couldn’t fool Alisha.

She grinned, but didn’t look up.

Thomas noticed a tingle of something in his chest that felt a little bit like gratitude.

He had to admit he was pretty lucky to have a sister like Alisha. She probably knew all along it wasn’t a real stab wound, and had still come to the doctor’s with him when he’d asked her.

I wish I’d been more generous, thought Thomas. I wish I’d bribed her with four jelly snakes instead of just two.

Still grinning, Alisha leaned over and prodded his bandage. Then she licked her finger.

‘Do you mind?’ said Thomas, but his heart wasn’t in it.

But he didn’t. It was too embarrassing.

Plus he couldn’t speak right now. The feeling in his chest was much stronger, and it wasn’t gratitude. He was having another attack.

Thomas closed his eyes and tried to stay calm. He tried to remember what number attack this was. The ninth today. Which made it one hundred and fifty-seven since the attacks began two weeks ago.

After a few moments, as always, his chest went back to normal.

Alisha was still looking at him.

‘I was eleven once,’ she said. ‘I know what it’s like when your body starts going weird. You don’t have to be embarrassed. It happens to everyone.’

No it doesn’t, thought Thomas. Not what I’ve got.

‘What is it you’re worried about?’ said Alisha. ‘Hair in strange places? Rude dreams? Funny-shaped willy?’

Thomas didn’t know where to look.

Thomas stared at her.

He’d never heard that concerned and understanding tone in her voice before. Not when she was speaking to him.

Thomas decided to tell her, even though he’d vowed never to tell a non-doctor anything private about himself ever again.

Before he could say a word, there was a loud thumping on the waiting-room windows.

Thomas looked up and his insides sank.

It was Rocco Fusilli and the boys from school. They were pressing themselves against the glass and pulling faces at Thomas and rubbing their chests in a way they obviously thought was hilarious.

Thomas pretended not to see them, and desperately hoped Alisha hadn’t seen them either.

‘Cretins,’ she said, glaring at the boys. ‘That school should get the pest exterminator in.’ Then she looked at Thomas and her face softened. ‘I’m guessing, seeing those lower life forms out there, that you’re worried about your chest.’

Alisha stared at him. Then she stared at the front of his t-shirt.

Thomas could see she was struggling not to smile.

It’s alright for you, he thought. You’re a girl. You’re allowed to have nipples.

Thomas wanted to say very, very, very itchy, but he didn’t because a woman had just walked into the waiting room and was sitting down opposite them. He nudged Alisha to keep quiet.

Alisha leaned towards him.

Thomas glanced anxiously at the woman and tried to look as though he didn’t know Alisha.

‘It’s normal,’ Alisha whispered to him. ‘I used to get it. When my boobs were growing.’

He wanted to point out to Alisha that (a) he was a boy (b) his boobs weren’t growing and (c) he hoped they’d stay that way. But he kept quiet because the woman was staring at him.

Just like she will later on, thought Thomas miserably, if I turn into a girl.

Alisha was glaring through the window at the boys again.

‘I told them,’ admitted Thomas. ‘After soccer one day. To see if any of them had ever had it.’

‘You idiot,’ said Alisha, about three times louder than she needed to, in Thomas’s opinion. ‘Never tell cretins anything personal. They’ll use it to get you, everybody knows that.’

He knew that now. The day after he told Rocco and the team about his itchy nipples, the whole school was whispering and giggling about Thomas Gulliver turning into a girl.

‘I’m just going outside for a sec,’ she said.

He could tell from her face what she was planning to do. Make Rocco Fusilli and the rest of the team wish they’d gone to soccer practice instead.

‘I’m just going out to use my phone,’ said Alisha. ‘I can’t get good reception in here.’

Thomas knew that wasn’t true. She’d been getting texts from her boyfriend Garth for the last ten minutes. Thomas had peeked and seen words like ‘lve’ and ‘sxy’.

He stood up to try and stop Alisha but it was no good. His nipples were killing him again and he needed both hands to scratch them.

Thomas sat back down and after a few moments, as usual, the itch started to fade.

He saw that the woman on the other side of the waiting room was peering out the window, watching Alisha yelling at the boys.

‘My sister’s just asking those boys to move because they’re affecting her phone reception,’ said Thomas. ‘It’s my fault, I made this appointment at a really bad time. Alisha always has a big backlog of texting to do after school.’

The woman pretended to be reading a magazine.

Thomas waited for yet another itch attack to fade, then took his arm bandage off. No point keeping it on now. He didn’t want the doctor distracted from his nipples.

He stuffed the bandage into his pocket and sucked the jam off his arm. When he’d finished he realised the woman was looking at him again and had gone a bit pale.

It was a lie, but the woman seemed relieved by the explanation.

Thomas’s nipples weren’t relieved by the explanation. They started itching again. Thomas couldn’t believe it. This was the fourth attack in the last five minutes. He’d never had so many this close together.

He clenched his teeth and waited until the woman was distracted again by Alisha chasing Rocco Fusilli across the medical-centre car park. Then he had a quick scratch and tried to feel if he was growing bosoms. He didn’t seem to be, but you could never be sure when it came to medical problems involving puberty.

A gruff male voice broke into his anxious thoughts.

Thomas dropped his hands guiltily from his chest. The doctor was standing in the doorway of the surgery, beckoning to him.

The moment had come. The moment he’d been dreading since he first began to suspect something awful and scary was happening to him, round about attack twenty-three.

Doubting Thomas is available in bookshops and libraries in Australia, New Zealand, the UK, and online:

The audio track on this page is an excerpt from the Bolinda Audiobook Doubting Thomas, read by Morris Gleitzman. Buy it online: