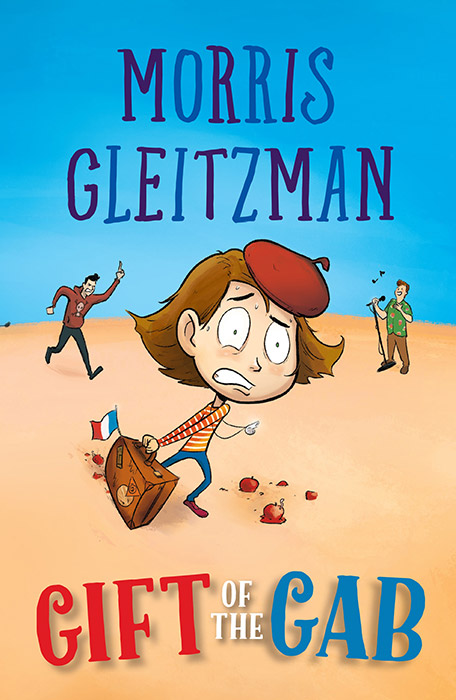 I don’t reckon the police should lock people up without hearing their side of the story.

My side of the story’s really simple.

I did it, but there was a reason.

I tried to explain to Sergeant Cleary why I did it. In the police car I wrote down in my notebook everything that happened today. Even the things that’ll probably make Dad send me to bed early when he hears about them.

I showed my statement to Sergeant Cleary while he was locking me in this cell.

I could see he wasn’t interested, though that might have been because Dermot Figgis was trying to bite him.

Police officers in small country towns have it really tough. The police stations are always understaffed. The only other officer on duty here today is Constable Pola, but he has to stay at the front desk in case of emergency calls or exciting developments in the car racing on TV.

Once Sergeant Cleary got Dermot into a cell, I tried to explain again. I banged on a wall pipe with my pen, like they do in prison movies.

‘Message from Rowena Batts,’ I banged in Morse code. ‘I only did it because of the dog poo.’

That was ten minutes ago.

Sergeant Cleary hasn’t been back.

He probably doesn’t know Morse code. Either that or I didn’t send it properly because my hands are shaking so much from outrage at Dermot Figgis and from worry about what’s going to happen to me.

‘Mr Batts?’ he’s probably saying. ‘We’ve got Rowena in the lock-up. We’ll be charging her and putting her on trial as a criminal.’

Just thinking about it gives me a lump in the guts bigger than Antarctica.

Poor Dad. I hate putting him through this. The shame. And the lawyer’s fees. He’s got enough on his plate with the root weevil in the back paddock.

If only the police would listen to me.

That’s the worst thing about being born with bits missing from your throat and not being able to talk with your voice, some people just won’t listen to you.

Which means they never hear your side of the story.

The police are hearing Dermot Figgis’s side. They can’t help hearing it, he’s been yelling it from the next cell for the last fifteen minutes.

‘Rowena Batts attacked my car,’ he’s yelling. ‘She filled it up with stewed apples.’

He’s right, I did, but as I said before, there was a reason.

It’s all here in my notebook. Including diagrams so the jury at my trial can see exactly what happened.

Some of the diagrams are bit wobbly. It’s hard to do neat drawing while your hands are trembling with outrage and indignation. The dog-poo diagram for example. It looks more like two shrivelled sausages. I’d better label it so there’s no misunderstanding.

And I’d better draw a diagram of the war memorial so the jury can see where the whole thing started.

This morning at the Anzac Day dawn ceremony.

Anzac Day’s a very special day for me and Dad. It’s our most important day of the year, including Christmas, birthdays and the release of a new Carla Tamworth CD.

So if anyone spoils it, I get pretty ropable.

I started getting ropable with Dermot Figgis at about 6.05 this morning.

As the first rays of the sun appeared over the supermarket, the crowd around the war memorial went quiet and Mr Shapiro played ‘The Last Post’ on his trumpet. Then we started the two-minute silence for the Aussie soldiers and other people who died in wars.

Dad reckons there were millions of them, including his grandfather who died in World War One, so even though it’s not the most important part of the day for me, I try to concentrate.

This morning it was impossible.

Dermot Figgis and some of his hoon mates were doing the sausages. The footy club always does a sausage sizzle on Anzac Day so people who get emotionally drained by the ceremony can have a hot breakfast after.

Everyone glared at him, including me.

Then I glanced anxiously at old Mr Wetherby. He was actually in World War One and saw quite a few of his mates die. It can really stress you if you’re trying to think about people who’ve died and other people are chopping onions noisily, specially if you’re ninety-eight.

I could see Mr Wetherby trembling in his wheelchair. For a sec I thought he was so angry he was having a seizure. Then I realised he was just excited because he was being filmed by a TV crew as one of the oldest diggers in the state.

I decided if I go that selfish and dopey when I’m eighteen, I’ll book myself in for a brain transplant.

I should have given Dermot a brain transplant there and then.

I would have done if I’d known what he was going to do half an hour later.

The two-minute silence ended and Dad stepped forward and cleared his throat.

Everyone stared. Some people looked cross and others rolled their eyes.

‘Oh no,’ someone muttered.

I couldn’t believe it. What were they upset about? They all knew Dad was going to sing, he does every year.

It couldn’t have been his clothes. Me and Dad got up extra early this morning and put a lot of effort into choosing him a respectful Anzac Day outfit. Black boots. Black jeans. Black shirt except for a tiny bit of yellow fringing. And he’d swapped his cow-skull belt buckle for one with an angel riding a really clean Harley.

The TV cameraman swung his camera away from Mr Wetherby and pointed it at Dad. I don’t think he’d seen an apple farmer that well-dressed before.

Mr Cosgrove, the president of the Anzac Day committee, was glaring at Dad even harder than he’d been glaring at Dermot Figgis.

‘Excuse me,’ I said to Mr Cosgrove sternly. ‘I think you’re forgetting something. Anzac Day isn’t just the day we remember the victims of war, it’s also the day my mother died.’

Mr Cosgrove didn’t understand all the words, of course, because he doesn’t speak sign language, but I could tell he got the gist because he gave a big sigh.

Dad sang the song he always sings at the Anzac Day dawn ceremony. It’s a beautiful Carla Tamworth country and western ballad about a truck driver whose wife dies and for the rest of his life he refuses to sell his truck because it’s got the impression of her bottom in the passenger seat.

It makes me very sad, that song, because Mum died soon after I was born, so I haven’t got those sorts of lasting memories of her.

It affected everyone else too, even though Dad’s not that great a singer. Mr Wetherby dabbed away a tear and quite a few other people put their heads in their hands.

I could tell everyone was having strong feelings.

All except Dermot Figgis.

I heard giggling and turned and there was Dermot, dopey blond dreadlocks jiggling as he and his mates pointed at Dad and stuffed hot-dog buns in their mouths to stop themselves laughing.

World War One exploded in my head.

I stormed over to Dermot, determined to shut him up.

On the way I picked up a large plastic bottle of mustard.

Gift Of The Gab is available in bookshops and libraries in Australia and New Zealand, and online:

The audio track on this page is an excerpt from the Bolinda Audiobook Gift Of The Gab, read by Mary-Anne Fahey. Buy it online: