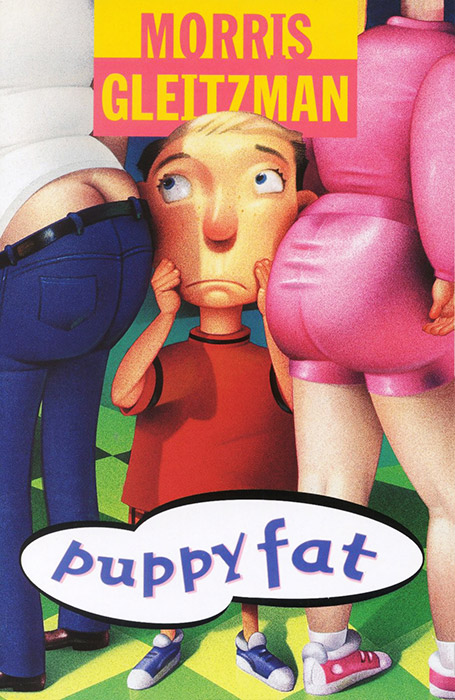 Keith stood at the front of the queue and sent an urgent message to the chicken nuggets and peas in his stomach. Relax, he told them. This isn’t a big drama. I’m just putting a couple of ads in the local paper. No need to get worked up.

‘Next,’ said the woman behind the counter.

Keith took a deep breath, stepped forward and handed her the two forms.

She peered at them for ages.

Suddenly the newspaper office had got very hot.

Perhaps someone wants to advertise a central heating system, thought Keith, and they’ve brought it in with them.

‘I can’t read this writing,’ said the woman.

‘What section do you want to advertise in? Toys? Sporting Equipment? Computers And Video Games?’ The woman took her glasses off and polished them wearily on her cardigan. ‘What are you advertising?’

She peered at Keith for even longer than she had at the forms.

This is it, thought Keith. This is where she either chucks me out or she doesn’t.

‘Your parents,’ said the woman.

The woman put her glasses back on and squinted at the pieces of paper.

Keith leaned forward and took them back.

‘Sorry about the writing,’ he said. ‘You’ll recognise the words when I read them. Mrs Lambert at school always does.’

He took another deep breath and had a quick word with his blood. Listen, he told it, half of South London’s in the queue behind us so I’d really appreciate you not rushing to my face and making it go red. Thanks.

‘This first one’s advertising my dad,’ said Keith to the woman. He started reading, pointing to each word. ‘Chef, 37 and a half, non-smoker, only swears on motorways, very little dandruff, good in goal, wants to meet kind woman (no criminal record) to go out together and be friends.’

Keith paused in case any women in the queue wanted to fix up a date now and save him the 27p a word, extra for thick type.

Never mind, thought Keith. People probably haven’t got time for romance when they’re trying to work out how much to ask for their lawn mower.

‘This other one’s advertising my mum,’ he said to the counter woman, who was staring at him suspiciously.

He held the other form up so she could see the words.

‘Council employee,’ he read, ‘only been 36 for a couple of weeks, very good at Monopoly, expert cuddler, never gets carsick, own TV, wants to meet kind man – ’

‘Excuse me,’ interrupted the woman.

For a sec Keith thought she’d spotted a bloke in the queue who wanted to invite Mum to the pictures, but she hadn’t.

‘Did your parents write these adverts themselves?’ asked the woman sternly.

The woman’s face grew even sterner.

‘They would have done,’ Keith added hurriedly, ‘but they’ve been a bit depressed lately. We went to live in Australia to try and save their marriage but it didn’t work out and they’ve been in the dumps a bit since we got back.’

‘I’m afraid we only accept Personals from the individuals concerned,’ said the woman. Keith sighed.

This was what he’d feared.

‘My best friend’s coming from Australia for a holiday,’ said Keith. ‘She’s only here for eleven days.’

‘What’s that got to do with it?’ asked the woman.

‘Tracy can perk anyone up,’ explained Keith, ‘even people who are seriously depressed. Starting next Thursday she’ll be here perking Mum and Dad up which’ll be the perfect time for them to be getting romantic letters and meeting new people and falling in love and cheering up and being happy for the rest of their lives.’

‘Tracy’s mum’s coming too,’ said Keith desperately. ‘She’s been married for eighteen years. She’ll be able to help them sort through the letters and pick the good partners.’

I bet you’re not sorry, thought Keith bitterly as he turned away. I bet you’re only doing the job for the cheap lawn mowers.

As he walked dejectedly out of the newspaper office he looked closely at the people in the queue to see if anyone was having second thoughts about asking Mum or Dad out.

The glamorous countess gave the dashing cavalry officer a smouldering look. She walked slowly across the moonlit balcony, slipped her hand inside his tunic and pulled out a jar of instant coffee.

‘Ridiculous,’ said Mum, scowling at the TV. ‘That woman hasn’t got a bottom. And look at those ridiculous shoulders. She’s got enough padding in there to stuff a car seat.’

Keith sighed and had another chocolate finger.

It was getting worse.

Only three months since Mum and Dad had split up and here was Mum spending every evening flopped in front of the telly in an old housecoat and bed socks, criticising the adverts and neglecting her waistline.

Up until three months ago she’d been dead strict about chocolate fingers.

Two a day and ten on birthdays, that had been the rule.

Now it was a box a night.

And she didn’t care how many he had, either.

Perhaps if I pretend I didn’t hear, thought Keith, she’ll forget she asked.

‘Keith,’ said Mum, ‘use one of those chocolate fingers to clean the wax out of your ears and pass the rest to me please, love.’

Tragic, thought Keith sadly as he handed her the box. A clever woman who used to be really good at homework and Monopoly reduced to a lonely chocolate-guzzling vegetable.

But she could snap out of it, he knew she could.

All she needed was some help.

Dad was staring at a naked woman. Keith stared too.

A geography teacher wouldn’t lie on a red velvet settee wearing only a tiara and a pair of green slippers and let someone do a painting of her.

Not if the painting was going to be shown on telly.

The image on the TV changed to a reporter’s head.

‘If I had twenty-seven million quid,’ said Dad bitterly to the screen, ‘I wouldn’t blow it on an old painting, I’d get the cooker in the cafe overhauled.’

As Kelth’s eyes got used to the darkness in Dad’s living room he saw that Dad was lying on the settee wearing only a knitted beanie and his striped pyjamas.

‘Hello Keith,’ he said without looking up. ‘Didn’t see you come in.’

He swung his legs off the settee so Keith could sit down.

You’ve been settled there every night for the last three months, he thought sadly. Just as well this flat’s over the cafe and the heat from the frying stops it getting damp or you’d have moss on your bum.

Dad stretched out again with his legs over Keith’s knees.

Tragic, thought Keith. If anyone could see Dad now they’d think he was a victim of some tropical disease that makes you spend all your spare time watching telly. They wouldn’t have a clue they were looking at a man who could score 120 at tenpin bowling and cook any sausage in the whole world without bursting the skin.

It wasn’t true but he was desperate.

He was staring at the telly.

On the screen an Alsatian was driving a golf buggy.

Keith suddenly wanted to grab Dad and shake him and yell at him to pull himself together and get on with his life.

Instead he took a deep breath and calmed down.

Keith stood at the sink in the cafe and plunged a baked-bean-encrusted plate into the hot soapy water.

None of the baked beans moved.

As Keith scrubbed at the pebbles with a piece of steel wool he pretended they were gall stones he’d removed from the stomach of the woman in the newspaper office.

‘Thank you, oh, thank you,’ he imagined her sobbing. ‘You can put those ads in now if you like.’

‘Don’t need to,’ he imagined himself replying airily as he took off his surgeon’s gown. ‘There are plenty of other places to advertise mums and dads.’

Or on the sides of buses.

Keith grinned as he imagined painting a huge picture of Mum and Dad on the side of a bus including their phone numbers.

Then his face fell as he wondered how much London Transport would charge.

Keith tried to work out how long he’d take to earn thousands of quid in washing up money at 5p a plate and 7p for saucepans.

His brain went soupier than the washing up water.

What I need, thought Keith, is somewhere cheap I can display a really attention-grabbing picture of Mum and Dad where it’ll be seen by loads of people who aren’t being distracted by lawn mower prices.

Suddenly he stopped scrubbing the plate.

Why hadn’t he thought of it before?

Puppy Fat is available in bookshops and libraries in Australia and New Zealand and elsewhere, and online everywhere.

The audio track on this page is an excerpt from the Bolinda Audiobook Puppy Fat, read by Morris Gleitzman. Buy it online: