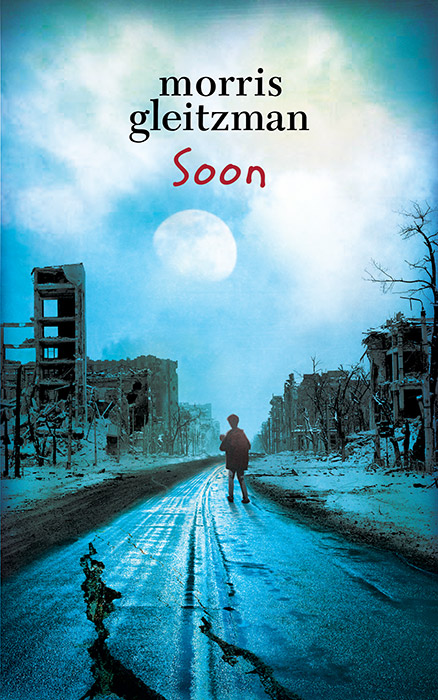 Soon, I hope, the world will be a safe and happy place.

This morning it isn’t.

Over there, for example. On the roof of the apartment building next door.

Two of them. Or is it three? I can’t see them because we’ve got sacks covering our windows, but I can hear their voices.

I try to keep my voice as quiet as I can.

‘Gabriek,’ I whisper urgently. ‘Wake up.’

I wish I didn’t have to disturb him. When he hears what I’m hearing, his poor middle-aged heart valves might not make it through to breakfast.

My heart valves are hammering away like the engines on a plummeting Nazi fighter plane.

You know how when a war ends and you give a big sigh because you’ve survived and things will be better and you start trying to live a normal daily life but things aren’t better because the city has been wrecked and people are hungry so you lay low on the second floor and pray that intruders won’t barge into your secret hideout and take it and kill you but now it looks like they’re going to?

That’s happening to me and Gabriek.

I slide out of bed and crouch low and wriggle over to the window. I open the sack curtains a bit and wipe my glasses and peer through the cracked windowpanes at the roof next door.

The dawn light is murky, but I can see them.

They haven’t seen us yet. They’re not pointing and plotting. But they could at any moment. If they see our cabbages and parsley they won’t be able to control themselves.

This is exactly what we said, me and Gabriek, when we found this place. Perfect except for one thing. The roof next door. The one spot we can be seen from. But the building under it is so wrecked we didn’t think anyone would make it up there.

They must be desperate.

I know how they feel. Me and Gabriek have to move fast to save ourselves.

I wriggle back to Gabriek’s bed.

While I shake him I look around the hideout, trying to decide what we can take with us.

The vegetable gardens in the oil drums are too heavy. The firewood is mostly still furniture and we haven’t got time to smash it up. The pickled cabbage? Gabriek’s vodka-making equipment? My medical library? Lucky I’ve only got two books.

‘What’s going on?’ he mumbles groggily.

He’s a very heavy sleeper. People who drink a lot of alcohol usually are.

I hurry back to the window to see if they’re heading this way.

That’s strange. Something about these people doesn’t look right. It’s the way they’re standing. They don’t look like ruthless violent home-stealers. They look scared. Like fugitives.

Then I see something else.

Creeping up behind the people, ducking between broken roof beams and collapsed chimneys, are several men.

The people haven’t seen the men.

Suddenly I know who the people are, and the men. I bang on the window and yell.

I only yell it once and I don’t manage to get a window open to warn the people because Gabriek, who isn’t groggy any more, flings himself at me and we both thud to the floor.

Yelling out loud around here is a serious breach of security.

But part of me isn’t sorry. The war’s over. This is meant to be peacetime. People shouldn’t be shot in peacetime.

I kneel up and see the armed men throwing bodies down into the street.

Gabriek drags me back onto the floor.

‘How many times do I have to tell you,’ he growls. ‘One simple rule. Stay quiet and out of sight.’

Gabriek likes simple rules. Mostly I obey them because he’s such a kind and generous friend and he’s forty-two and I’m only thirteen and he knows how to keep us safe.

But I know things too.

I know exactly who those murdering thugs are. I don’t even need to see the badges on their leather jackets.

Poland For The Poles, the badges say.

‘Those selfish bullies aren’t interested in us,’ I say to Gabriek. ‘They’re just after people who aren’t Polish.’

Gabriek gives me a look.

‘We’re warm here,’ he says, ‘and we’re dry and we’ve got food. Everybody’s interested in that. So we don’t want anyone knowing about this place, specially brutal killers.’

Gabriek’s right. But that doesn’t stop me wishing I could have helped those poor dead people lying in the street. Hunted down just because they were in the wrong country when the war ended.

‘Somebody should tell certain vicious pustules the war’s over,’ I mutter. ‘Tell them to stop killing and try a bit of sharing.’

‘Listen to me,’ says Gabriek, his mouth very close to my ear. And my nose, which a person shouldn’t do when they drink a lot of cabbage vodka.

‘You want to change the world,’ says Gabriek. ‘That’s natural at your age. But only dreamers try to change things when the world’s in this state. Sensible people know it’s as much as we can do to look after ourselves.’

I know how lucky we are, surviving this long. How lucky I am to have Gabriek’s good protection.

‘How do you spot a sensible person?’ says Gabriek.

I sigh. Gabriek says this at least once a day. ‘They’re alive,’ says Gabriek. ‘Sensible people stay alive because they don’t get involved in other people’s business and they don’t take risks.’

I keep my mouth shut. Partly because it’s what sensible people do when they’re lying on a floor that always has rat poo on it no matter how often you sweep. But mostly because Gabriek wouldn’t want to hear what I’m thinking.

I’m thinking of all the people who got involved in my business.

Who took risks for me.

Barney and Genia and Zelda and the others.

But I’m here because of them, and the best way I can thank them is to be like them.

Soon is available in bookshops and libraries in Australia, New Zealand, the UK, and online:

The audio track on this page is an excerpt from the Bolinda Audiobook Soon, read by Morris Gleitzman. Buy it online: