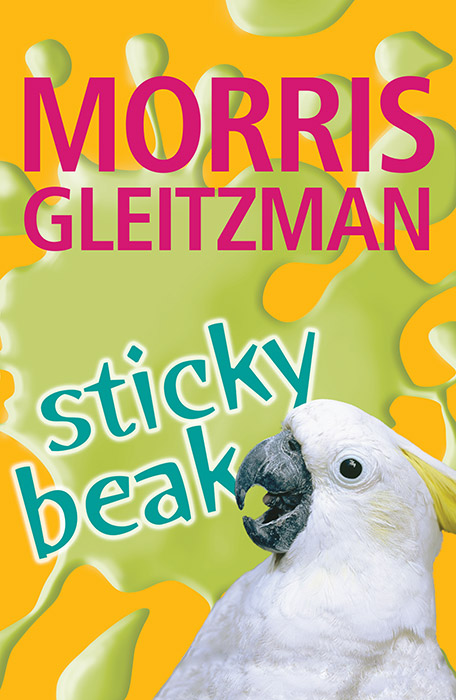 I reckon there’s something wrong with me.

Normal people don’t do what I’ve just done – spoil a wonderful evening and upset half the town and ruin a perfectly good Jelly Custard Surprise.

Perhaps the heat’s affected my brain.

Perhaps I’ve caught some mysterious disease that makes things slip out of my hands.

Perhaps I’m in the power of creatures from another planet who own a lot of dry-cleaning shops.

All I know is ten minutes ago my life was totally and completely happy.

Now here I am, standing in the principal’s office, covered in raspberry jelly and lemon custard, waiting to be yelled at and probably expelled and maybe even arrested.

I reckon it was the heat.

It was incredibly hot in that school hall with so many people dancing and talking in loud voices and reaching across each other for the party pies.

And I was running around nonstop, keeping an eye on the ice supply and mopping up spilt drinks and helping Amanda put out the desserts and reminding Dad to play a few waltz records in between the country stuff.

I had to sprint up onto the stage several times to stop the ‘Farewell Ms Dunning’ banner from drooping.

Plus, whenever I saw kids gazing at Ms Dunning and starting to look sad, I’d dash over and stick an apple fritter in their hands to cheer them up.

Every few minutes I went and stood in front of the big fan that Vic from the hardware store had lent for the night, but I still felt like the Murray-Darling river system had decided to give South Australia a miss and run down my back instead.

How a person with hair that thick and curly can stay cool on a night like this beats me.

Every time she saw me in front of the fan she gave me a grin.

Don’t worry, the grin said, everything’s under control and Ms Dunning’s having a top time.

That’s the great thing about a best friend, half the time you don’t even need words.

I’d just given fresh party pies to the principal and the mayor and was heading over to the food table with the bowl of Jelly Custard Surprise when the formalities started. The music stopped and we were all deafened by the screech of a microphone being switched on and the rumble of Amanda’s dad clearing his throat.

I gave her a look. Don’t panic, it said, once you get up to the microphone you’ll be fine.

I didn’t know if it was true, but I could see it made her feel better.

‘Ladies and gentlemen,’ said Mr Cosgrove, ‘on behalf of the Parents and Teachers Association Social Committee, it’s time for the presentation to our guest of honour.’

There was a silence while everyone looked around for Ms Dunning.

She was at the food table, looking startled, gripping Darryn Peck’s wrist.

I felt really proud of her at that moment.

There she was, eight and a half months pregnant, hot and weary after spending the whole afternoon making the Jelly Custard Surprise, and she was still taking the trouble to stop Darryn Peck using my apple friitters as frisbees.

No wonder we all think she’s the best teacher we’ve ever had.

Ms Dunning let go of Darryn Peck and went over and stood next to Mr Cosgrove while he made a long speech about how dedicated she is and how sad we all are that she’s leaving the school but how we all understand that babies are the future of Australia.

Then Mr Cosgrove called Amanda to the microphone.

She was so nervous she almost slipped over in a drink puddle, but once she was there she did a great job. She read the speech we’d written in her loudest voice without a single mistake, not even during the difficult bit about Ms Dunning being an angel who shone with such radiance in the classroom we hardly ever needed the fluoros on.

After Amanda finished reading she presented Ms Dunning with a carved wooden salad bowl and matching carved wooden fork and spoon which the Social Committee had bought after ignoring my suggestion of a tractor.

Everyone clapped except me because I had my hands full, but I wobbled the Jelly Custard Surprise to show that I would have if I could.

Ms Dunning grinned and blushed and made a speech about how much fun she’d had teaching us and how nobody should feel sad because she’d see everyone most days when she dropped me off at school.

Even though it was a short speech, she was looking pretty exhausted by the time she’d finished.

‘I’m pooped,’ she grinned. ‘Where’s that husband of mine?’

Dad stepped forward and kissed her and she leant on his shoulder and there was more applause.

Dad gave such a big grin I thought his ears were going to flip his cowboy hat off.

I was grinning myself.

I reckon marrying Ms Dunning is the best thing he ever did, and that includes buying the apple-polishing machine.

Seeing them standing there, smiling at each other, Ms Dunning smoothing down the fringe on Dad’s shirt, I felt happier than I have all year, and I’ve felt pretty happy for most of it.

Which is why what happened next was so weird.

Dad cleared his throat and went down on one knee so his eyes were level with Ms Dunning’s bulging tummy.

I wasn’t surprised at that because he does it all the time at home. The mayor, though, was staring at Dad with his mouth open. Mayors get around a fair bit, but they probably don’t often come across apple farmers who wear goanna-skin cowboy boots and sing to their wives’ tummies.

As usual Dad sang a song by Carla Tamworth, his favourite country and western singer.

It was the one about the long-distance truck driver who listens to tapes of his two-month-old baby crying to keep himself awake while he’s driving.

As usual Dad had a bit of trouble with a few of the notes, but nobody seemed to mind. Ms Dunning was gazing at him lovingly and everyone else was smiling and some people were tapping their feet, including the mayor.

I was enjoying it too, until Dad got to the chorus.

‘Your tears are music to my ears,’ sang Dad to Ms Dunning’s midriff, and that’s when my brain must have become heat-affected.

Suddenly my heart was pounding and I had a strange sick feeling in my guts.

And suddenly my feet were sliding and suddenly the Jelly Custard Surprise wasn’t in my hands anymore.

The bowl still was, but the Jelly Custard Surprise was flying through the air.

It hit the grille of the big hardware store fan, and then everyone in the ball disappeared into a sort of sticky mist. It was just like when Dad sprays the orchard, except his mist isn’t pink and it hasn’t got bits of custard in it.

I stood there, stunned, while people shrieked and tried to crawl under the food table.

The mayor still had his mouth open, but now it was full of jelly.

Mr Cosgrove was staring down at his suit in horror, looking like a statue that had just been dive-bombed by a large flock of pink and yellow pigeons.

Darryn Peck was sitting in a Greek salad. I only knew it was him because of the tufts of ginger hair poking up through the sticky pink stuff that covered his face.

I blew the jelly out of my nose and ran out of the hall and thought about hiding in the stationery cupboard but came in here instead.

I’d have ended up here anyway because the principal’s office is always where people are taken to be yelled at and expelled and arrested.

There’s someone at the door now.

They seem to be having trouble opening it.

It’s pretty hard getting a grip on a door handle when you’ve got Jelly Custard Surprise running out of your sleeves.

I’d help them if I wasn’t shaking so much.

Sticky Beak is available in bookshops and libraries in Australia and New Zealand and elsewhere, and online:

The audio track on this page is an excerpt from the Bolinda Audiobook Sticky Beak, read by Mary-Anne Fahey. Buy it online: