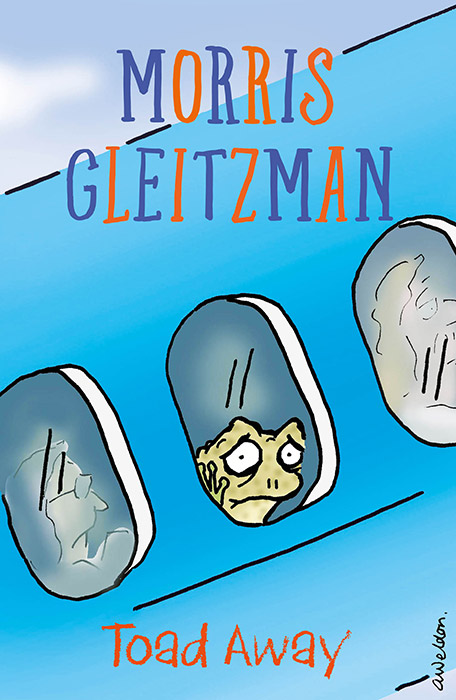 He hopped closer through the long grass for a better squiz.

There were three of them. Big ones. Fully-grown, by the look of it.

He had to admit they were magnificent creatures.

Their picnic rug was pretty nice too.

‘They’re called humans,’ said a grasshopper. ‘You can tell from their smooth skin and fat bottoms and unwise choice of shorts. I’d watch out. They hate you dopey cane toads even more than runny poo.’

He tried not to be scared.

‘Sorry, Uncle Ian,’ whispered Limpy. ‘I’ll have to put you down. I can’t tackle these humans with a dead rellie on my back.’

Limpy slid Uncle Ian off his shoulders and laid him on a soft patch of moss. He knew what he was about to do was very dangerous, but the sight of Uncle Ian’s poor flat body, criss-crossed with tyre tracks and baked hard in the sun, made something inside Limpy harden too.

Limpy thought of all the other poor rellies he’d seen squashed by humans on the highway. All those poor startled eyes glaring out of flat tummies and poor tragic ears poking out of even flatter bottoms.

‘Those humans over there are so busy eating,’ he whispered to Uncle Ian, ‘they won’t notice me. I can creep up and get really close without them seeing me, and then I can ...’

‘Stab them with their own cutlery,’ said the grasshopper. ‘In the buttocks.’

Limpy looked at the grasshopper, shocked.

‘I’m not going to stab them,’ said Limpy. ‘I’m going to make friends with them.’

The grasshopper stared back, looking just as shocked.

‘Make friends with humans?’ it said. ‘Why would you want to do that? Specially hairy ones with tattoos and big boots.’

‘If I can make friends with them, this won’t happen any more,’ said Limpy, pointing to poor flat Uncle Ian. ‘Friends respect each other. They don’t bash each other with rocks and drive over each other in vehicles.’

The grasshopper snorted. ‘You haven’t seen humans after a few beers.’

‘Aunty Pru reckons friendship is possible between all species,’ he said. ‘Except the ones that eat each other. Humans and cane toads don’t eat each other, so we can be friends if we want to.’

‘Yeah,’ said the grasshopper. ‘And sludge worms might fly.’

Limpy decided to ignore the grasshopper.

If I’m going to pay those humans a social call, he thought, I should take them a gift. Something nice for their picnic.

He peered over at the men. He could see pies in their fists, and sausage rolls in their lunchboxes, but no sauce.

Perfect, thought Limpy. I’ll whip them up a batch of Mum’s slug sauce. That’ll get the friendship off to a great start.

While Limpy rummaged through the stinkweed looking for slugs, he had a wonderful vision of humans and cane toads being the best of friends. Going on bush walks together. Playing mudslides. Swapping recipes.

He plucked a fat slug off a stalk.

At first Limpy thought it was the slug.

‘Do you mind,’ said the muffled voice.

Then Limpy recognised the complaining tone.

Limpy looked around, but couldn’t see his cousin anywhere.

‘You’re standing on him,’ said the slug.

Limpy looked down. Under his feet was a big clump of stinkweed.

‘Get off,’ said the stinkweed.

The stinkweed rose slowly into the air. Under it, glaring at Limpy from a bog hole, was a familiar warty face.

‘Goliath,’ said Limpy. ‘What are you doing?’

Goliath clambered out of the hole, the stinkweed still on his head.

‘At the moment,’ said Goliath, ‘I’m getting a headache.’

He saw there was mud all over Goliath’s big body and face. Usually when Goliath had mud on him it was in splotches. This was different.

Limpy was impressed. Usually when Goliath played commandos he made do with swamp slime on his face and a sprig of wattle in his bottom. These wavy lines must have taken ages.

There was something in Goliath’s growl that made Limpy’s warts start to prickle with concern.

‘Goliath,’ said Limpy. ‘I’m in the middle of something pretty important myself. Would you mind playing your commando game somewhere else?’

‘It’s not a game,’ said Goliath, glaring at the men on the picnic rug and flexing his poison glands. ‘I’ve declared war on humans.’

Limpy stared at him, horrified.

Goliath gripped a sharp stick between his teeth, threw himself on the ground and started wriggling on his stomach through the long grass towards the humans.

Limpy flung himself after Goliath, grabbing onto one of his cousin’s big feet. For a while he was dragged along behind Goliath, grass stems jabbing him under the arms.

‘Limpy,’ he said. ‘Let go and that’s an order. I can’t go into battle with you hanging off my foot. It’s not good for your crook leg.’

Limpy let go of Goliath’s foot and grabbed one of his big brawny legs. He knew that beneath Goliath’s tough scowling mud-streaked exterior, in among the half-chewed swamp rats and car accessories, lay a gentle heart.

‘War will just make things worse,’ said Limpy. ‘Sorry, haven’t got time to chat,’ said Goliath, pulling his leg away. ‘Got a battle plan to follow. Fourteen hundred hours, attack humans, kick their buckets of chips over, stab them in the shins with sharp bits of pie crust.’

Limpy realised one of Goliath’s fists was buzzing.

Goliath opened it. A cluster of dazed bush flies sat on his palm.

‘You can’t send us over there without artillery support,’ said one. ‘Those humans might have insect spray.’

‘Be quiet,’ roared Goliath. ‘You’re in the military now.’

‘You two,’ said Goliath to the grasshopper and the slug. ‘Form a platoon and prepare to follow me into battle.’

‘Silence in the ranks,’ said Goliath. ‘Stand by to attack.’

Stack me, thought Limpy. This is worse than I thought.

He had a horrible vision of Goliath starting a huge war and being crushed by a human tank, or even a human lunchbox. And then Mum and Dad and Charm and cane toads everywhere being wiped out.

Goliath looked at him thoughtfully. ‘What, you mean jump on the enemy out of trees and stuff swamp slime up their nostrils?’

‘Not exactly,’ said Limpy. ‘I mean try and make friends with them.’

Goliath’s eyes bulged so much that for a moment Limpy thought Goliath was going to explode and spray warts in all directions.

‘Make friends with them?’ croaked Goliath. ‘Are you mad?’

‘Got it in one,’ muttered the grasshopper.

‘You can’t make friends with monsters who do this,’ yelled Goliath. ‘All you can do is try and wipe them out, or at the very least force them back to the carparks they came from. And that’s what I’m going to do.’

Limpy tried to stay calm. He loved Goliath very much, but sometimes, he thought, Goliath is like one of those forms of swamp life that are so stupid they don’t even know when a lizard is eating their brains.

Perhaps it’s not so bad, Limpy told himself. Perhaps Goliath will come to his senses and realise he’s not going to win a war with an attack force of one cane toad and a few insects.

‘Actually,’ said the slug to Goliath. ‘Those three humans look pretty tough. I don’t think we’ll be able to wipe them out on our own.’

Limpy, relieved, could see that Goliath was thinking the same thing.

Goliath glared at the slug.

‘Leave the military planning to me, private,’ he said. ‘We won’t have to wipe them out on our own because I’ve got an army.’

Toad Away is available in bookshops and libraries in Australia, New Zealand, the UK, and online:

The audio track on this page is an excerpt from the Bolinda Audiobook Toad Away, read by Morris Gleitzman. Buy it online: