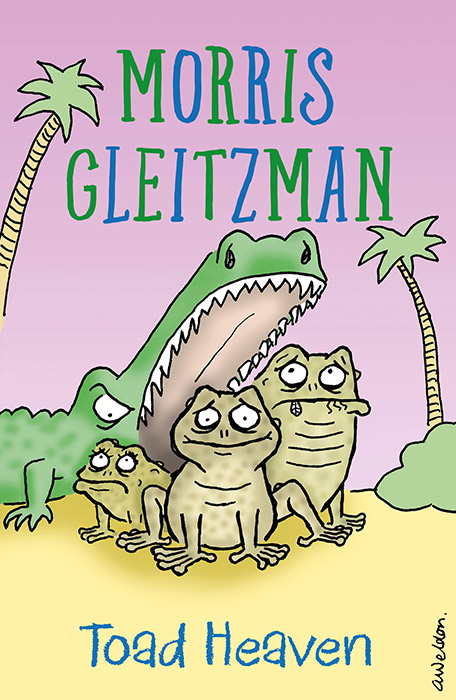 Limpy stuck his head out of the grass and peered up and down the highway. He felt his crook leg twitching and his warts tingling like they always did when he was excited.

All clear. No headlights speeding out of the darkness. No trucks, cars, buses or caravans thundering along the highway. No humans on wheels looking for cane toads to squash.

‘Do what?’ said Goliath.

‘I haven’t had any dinner yet,’ grumbled Goliath. ‘I’m so hungry I could eat a human’s hairbrush.’

‘We’ve got a plan, remember?’ said Limpy. ‘If it works it’ll improve the lives of cane toads everywhere.’

‘What,’ sneered a nearby bull ant, ‘even the ones that are already flat?’

In the glow from the railway-crossing light he saw that Goliath was frowning.

‘Do exactly what I told you,’ said Limpy, ‘and you will.’

Limpy didn’t eat the bull ant. What he and Goliath were about to do was too important to waste time having a snack.

Poor thing, thought Limpy. Probably as tense as me. Or else he’s got a stink beetle stuck in his throat.

Limpy turned to Uncle Nick, who was lying at the edge of the road.

Uncle Nick didn’t reply either. Limpy would have been surprised if he had. Uncle Nick had always been a silent sort of bloke, even before he was squashed flat by a truck and baked hard by the Queensland sun.

‘Sorry about this next bit,’ added Limpy.

Struggling with the weight, Limpy picked Uncle Nick up, careful not to touch his sticky side, and handed him to Goliath.

‘You sure you know what to do?’ panted Limpy.

Goliath’s frown had got bigger, like the time he’d tried to swallow a giant stick insect and then realised it was the tailpipe off a bus.

For a moment Limpy was worried Uncle Nick was too heavy for Goliath. But it couldn’t be that. Goliath was twice as big as Limpy, and four times as strong.

Then Limpy realised why Goliath’s forehead was so crumpled.

‘I still don’t get how this is gunna work,’ complained Goliath. ‘I hate to say it, but I reckon that bull ant’s right.’

The bull ant gave a chortle of triumph that only stopped when Goliath ate him.

‘To stay healthy, we need flying insects in our diet, right? Because they’re rich in vitamins and minerals.’

‘Right,’ said Limpy. ‘And the place to find flying insects is on the highway under the railway-crossing light. Which makes us easy targets for humans in vehicles. There’s nothing a human in a vehicle likes better than driving over a cane toad, right?’

‘That and picking their noses,’ said Goliath. ‘Lucky mongrels. Wish I had a couple of little cupboards in my face.’

‘OK,’ said Limpy. ‘On the count of three. One, two ...’ He checked that the highway was still clear and gave a signal to the family members waiting in the grass on the other side.

Goliath grumbled some more, flexed his muscly arms, arched his back, and flung his round flat dry sticky uncle high into the air like a frisbee.

It was a perfect throw.

High above them Uncle Nick seemed to hover, spinning in the cloud of insects flying around the railway-crossing light.

Limpy strained to see if any of them were getting stuck onto the sticky sap.

Then, suddenly, dazzling headlights roared round the bend in the highway. Huge wheels thundered over the railway tracks.

He leaped into the ditch, dragging Goliath down after him, his hopes nosediving into the mud at the same time.

It’s not fair, thought Limpy. No uncle should be hit by two trucks. Not on different nights. If this truck makes contact, Uncle Nick’ll be smashed to bits. The family members on the other side could be injured by jagged pieces of flying uncle.

As the truck rumbled away into the night, Limpy peered anxiously up at the white haze over the railway crossing.

And saw, weak with relief, that Uncle Nick was still airborne. He was wobbling slightly but was still on course, spinning down towards the undergrowth on the other side of the highway.

Uncles and aunts, cousins and neighbours were scrambling out of the ditch on the other side and hopping into position to catch Uncle Nick as he landed. Some were so excited they jumped too soon and fell in a heap, which gave Uncle Nick something nice and soft to land on.

‘It worked,’ shouted the family members whose mouths weren’t full of mud. ‘Good on you, Limpy and Goliath.’

He beckoned them to bring Uncle Nick back through the stormwater tunnel under the road.

As they emerged Limpy looked anxiously to see how many flying insects Uncle Nick had stuck to him.

Not a huge number, but enough for a start.

He turned to congratulate Goliath on a top throw. And saw that Goliath was still lying at the bottom of the ditch, face in the mud, sobbing.

‘I knew it,’ Goliath was croaking, broad shoulders shuddering with misery. ‘I knew it was a dopey idea. I knew a truck would come. Now I’ve broken Uncle Nick.’

Limpy tapped Goliath on the warts and pointed at the family faces grinning down at him.

Goliath blinked, sniffed, and stared up at Uncle Nick and his coating of insects.

Limpy and the others chuckled. They’d never seen an actual pizza in real life because the pizza boxes humans threw out of cars only had bits of crust in them, but they knew what Goliath meant.

‘Now I get it,’ said Goliath happily. ‘This is a way for us to collect flying insects without going onto the highway. And if we don’t go onto the highway, humans can’t run us over. Because humans only drive on the highway.’

Limpy grinned. Goliath might be a bit slow, but he got there in the end.

The other cane toads applauded.

Then the happy group hurried towards the swamp to tell everyone else the good news and share the flying insects with them.

Limpy glowed with pleasure. Right up until a sudden violent noise made him spin round.

He froze in stunned disbelief, barely able to believe what he was seeing.

He’d never seen anything like it, not once in his whole life.

He heard Goliath and the others croak with amazed fear as they saw it too.

A vehicle, headlights blazing and motor revving, had driven off the highway and was crashing through the undergrowth, coming straight at them.

Toad Heaven is available in bookshops and libraries in Australia, New Zealand, the UK and elsewhere, and online:

The audio track on this page is an excerpt from the Bolinda Audiobook Toad Heaven, read by Morris Gleitzman. Buy it online: