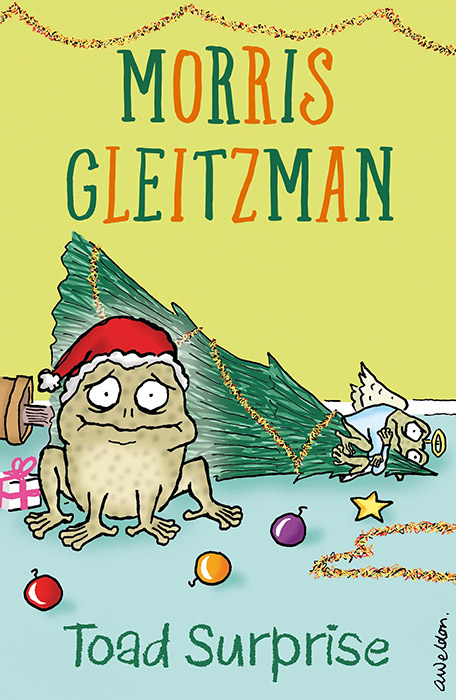 ‘Everyone off the road.’

It was dinner time in North Queensland. On the highway, in the glowing dusk, cane toads were munching contentedly. And burping a bit. All except for Limpy, who was hopping up and down on top of an ant hill, waving frantically at the others.

The other cane toads on the highway didn’t move. They didn’t even look up.

Oh no, realised Limpy, they can’t hear me.

He knew why. It was because they were such noisy eaters. And their dinners were even noisier. The air was full of flying insects complaining loudly about being eaten.

Limpy pointed to the headlights in the distance.

It was no good.

Down on the road, his relatives couldn’t see what he could see up on the ant hill. They just carried on munching, unaware that sixteen wheels were about to hurtle round the bend in the highway and seriously flatten their warts.

Limpy’s warts were prickling with panic. If his rellies didn’t shift their buttocks soon, they’d be wearing them as eyebrows.

A flying insect stuck its head out of a cane toad’s mouth and caught sight of Limpy’s desperate hopping and waving.

‘Hey, you lot,’ yelled the flying insect. ‘Pay attention. That young bloke’s telling you to stop scoffing us and get off the road.’

Other flying insects saw Limpy and started yelling at the cane toads too. Slowly, the rellies got the message. They began to hop off the highway, still chewing.

But it was too late.

The truck roared round the bend and suddenly its huge headlights turned dusk into day.

Several cane toads were still on the road, huddled together, chewing as fast as they could.

He knew what would happen next.

The truck swerved across the road, directly towards the now trembling cane toads, and drove over them.

Limpy moaned and slumped onto the ant hill.

‘Excuse me,’ said an annoyed voice.

An ant was glaring at him.

‘Would you mind not making so much noise on our roof,’ said the ant. ‘We’re trying to get the kids to bed.’

It was a fair enough request. When Limpy had asked the ants if he could use their hill as a lookout, they’d said yes as long as he didn’t eat them afterwards or keep their kids awake.

The ant peered down at the squashed rellies on the highway and gave Limpy a sympathetic look.

‘Apology accepted,’ said the ant. ‘Bad luck about that lot. Still, three or four’s not as bad as it used to be before you had the lookout, eh?’

The ant was right, but it didn’t make him feel any better.

‘We’re very grateful for the use of the roof,’ said Limpy. ‘If there’s anything we can do in return, just let us know. Your kids are welcome to use our mud slide. And if you ever need repairs done to your hill, my cousin Goliath can carry huge amounts of mud in his mouth.’

While the ant was thinking about this, Limpy saw something out of the corner of his eye that made him forget all about roof repairs.

Another vehicle was coming.

And a toad was still squatting out in the middle of the highway.

‘Thanks again,’ said Limpy hastily to the ant, and hopped off the ant hill. He hit ground so hard he felt like he’d dented several warts, but he hurried onto the highway towards Goliath.

Not too fast, Limpy reminded himself.

That was the worst thing about having a crook leg. Try to hop too fast and you just went round in circles. Which wasn’t so good when you were trying to rescue a stubborn rellie from certain death.

‘Goliath,’ shouted Limpy as he got nearer to his cousin. ‘Don’t do it. Get off the road.’

‘Don’t try to stop me,’ said Goliath, glaring into the approaching headlights. ‘Those mongrel humans have pushed us around for too long. Well this is showdown time. I’m an angry cane toad and I’ve got a stick.’

Arguing with Goliath was pointless. When he got an idea in his head, not even a large rock would shift it.

Limpy grabbed Goliath’s big arm and tried to drag him off the highway. But Goliath was too heavy. Limpy couldn’t even drag Goliath off the white line.

‘Mongrel,’ Goliath was yelling at the vehicle. ‘I’m gunna pop your tyres and stab your wheel rims.’ The vehicle was so close now that Limpy could feel the heat from the headlights.

Suddenly he knew this was it.

The moment he’d always feared. The moment he and poor Goliath would end up flat and dead, just like all the sun-dried rellies Limpy had spent his life hauling off the highway and carrying home and stacking neatly in his bedroom, one stack for uncles, one for aunties, one for cousins and one for their popped-off warts.

No point running now. Cane toads weren’t as fast as vehicles, and vehicles could swerve all over the road when there was squashing to be done. It was a law of nature.

Limpy blinked in the glare of the headlights. For a moment he felt a pang of regret that he’d never achieved his life’s ambition – friendship between humans and cane toads.

He made sure that his last thought was about Mum and Dad and Charm and how much he loved them and how to reassemble a squashed cane toad’s buttocks after he was dead.

Then an amazing thing happened.

So amazing, Limpy couldn’t believe it even as he watched it.

The vehicle swerved, but not towards him and Goliath.

The driver must have hit the brakes because suddenly the tyres were squealing. As the ute skidded past, the wind from it was so strong that Limpy felt his face being pulled out of shape.

His brain felt pulled out of shape too.

Limpy had never seen this before.

A human driver trying on purpose not to kill a cane toad.

Limpy watched, stunned, as the ute slewed off the highway and came to a sudden stop in the long grass, not far from the ant hill.

Goliath was looking pretty stunned too.

‘I won,’ he croaked, staring at his stick in a dazed sort of way. ‘Unreal.’

‘It’s more than unreal,’ said Limpy. ‘That human has just done the most amazing thing in the history of cane toads.’

Goliath scowled at the ute in the long grass.

Limpy hopped over to the edge of the highway and cautiously approached the ute through the grass.

He could hear Goliath following close behind.

‘If the human isn’t hurt now,’ muttered Goliath, ‘he will be as soon as I can sharpen this stick. And as soon as you give me a leg up so I can reach his belly button.’

‘I don’t want you to even think about hurting him,’ said Limpy. ‘Because what you are about to see is something you’ve never seen before.’

Goliath stared at Limpy and snorted. ‘No such thing.’

But Limpy knew there was. He’d seen it with his own eyes.

And now, as he watched the driver’s door swing open and two legs appear, a hopeful glow spread through his warts. Was is possible that this human might be able to help him achieve his life’s ambition?

Friendship between humans and cane toads, with no killing.

Limpy didn’t say anything to Goliath.

It was probably a silly thought.

But as the rest of the human emerged from the ute, the thought suddenly didn’t seem so silly after all.

Limpy realised he was squeezing one of Goliath’s warts very hard with excitement as he gazed up at the human.

At the big black boots.

At the red jacket and pants.

At the long white beard.

Toad Surprise is available in bookshops and libraries in Australia, New Zealand, the UK, and online:

The audio track on this page is an excerpt from the Bolinda Audiobook Toad Surprise, read by Morris Gleitzman. Buy it online: