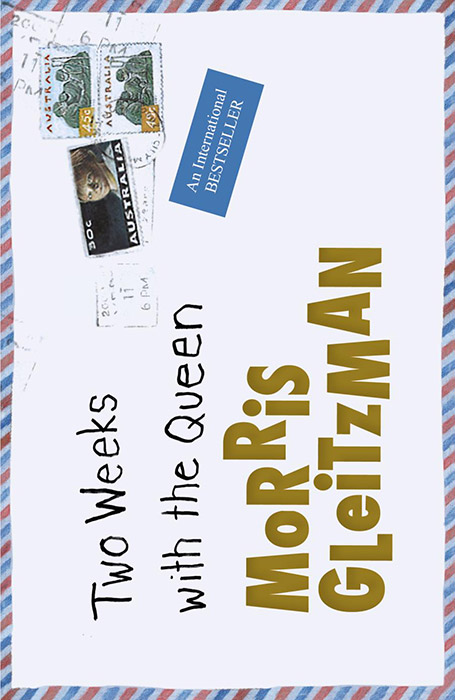 The Queen looked out across the Mudfords’ living room and wished everyone a happy Christmas.

Easy for you, he thought. Bet you got what you wanted. Bet if you wanted a microscope you got a microscope. Bet your tree was covered with microscopes. Bet nobody gave you daggy school shoes for Christmas.

Colin looked away from the Queen’s flickering face on the TV screen and down at the shiny black shoes peeping up at him from their box on the threadbare carpet.

The Queen obviously couldn’t see them because she continued her Christmas Message without once chucking up.

‘... ridding our world of suffering and pain is not an easy goal,’ she was saying, ‘but we will achieve that goal if it is our sincere wish.’

Colin’s sincere wish was that the shoes would burst into flames and explode into pieces. But they didn’t, even though they were being shot at by a low-flying MiG fighter plane.

Colin stared out the window at the dusty paddocks. The shimmering glare was painful to look at, but not as painful as the sight of Luke playing happily with his model plane. Why should that little whinger get exactly what he wanted, right down to the colour of the pilot’s helmet and the number of napalm canisters under the wings?

‘... fair share of the world’s resources for all her people,’ the Queen was saying.

Colin looked at his parents. He hoped the Queen was making them feel guilty.

It didn’t look as though she was. People who are riddled with guilt don’t usually cuddle up on the settee and fan each other with bits torn off a beer carton.

Colin stared at them for a while but that didn’t plunge them into guilt either, so he went back to watching the Queen.

He wondered what it would be like to be that important. So important that it didn’t even matter if you spoke like a total prawn, millions of people all over the world would sit down on Christmas afternoon and say shhhh and listen to you.

In his head, Colin started composing a letter.

‘Dear Your Majesty The Queen, I would be very grateful if you could send some tips on how to grab people’s attention and make them listen to you, understand what you want for Christmas etc. Even though I’m twelve I might as well be a lump of wood for all the attention I get around this place. Also some tips on how to stop younger brothers getting everything. I understand that chopping their heads off has been used a bit in your family. This is frowned on in Australia so something legal please ...’

Several loud explosions echoed around the shoe box as Luke roared in for another attack on the aircraft carrier HMS Yukky School Shoes.

Serves you right, thought Colin, for having three lots of ice-cream with your Chrissie pud.

‘Serves you right,’ said Mum, ‘for having four lots of ice-cream with your Chrissie pud.’

Four? Colin couldn’t believe his ears. When he was eight he’d only been allowed two. Young kids today didn’t know how well off they were.

‘Try keeping the racket down a bit,’ said Dad, and you’ll feel better.’

‘Probably a strain of heat-resistant bacteria in the Chrissie pud,’ said Colin. ‘Pity we haven’t got a microscope in the farmily, I could have run some tests and spotted it.’

Colin saw Mum and Dad swap a little glance that he wasn’t meant to see.

They knew. They actually knew what he was busting for and they’d still given him shoes. Boy, wait till he had time to write that anonymous letter to the child welfare department.

Luke came over and held out the MiG in a skinny hand.

Colin shook his head. That’s all he needed, charity from an eight year old.

Luke’s pale brow furrowed for a second, then he was away, inflicting serious artillery damage to an already battered cane chair.

A gust of scorching wind swept in from the Western Plains and made the plastic branches of the Christmas tree flap wildly. Something in the kitchen started to bang.

Colin dragged himself to his feet.

‘Luke’d get their quicker,’ he muttered, ‘he’s got turbo thrusters and I’ve only got lace-ups.’

But Mum and Dad’s eyes were already glued back on the TV screen.

‘... in these difficult times,’ the Queen was saying, ‘we have to work and struggle for privilege and good fortune.’

‘Bull,’ said Colin loudly as he slouched out to the kitchen, ‘some people are born with it.’

Mum and Dad stared at the Queen. Colin stared at Luke.

As Colin wedged a chicken bone under the screen door to stop it flapping open again, he heard the music playing at the end of the Queen’s Christmas Message. Then he heard footsteps behind him. He straightened up. It was Mum and Dad.

Mum gave a little cough to clear her throat. ‘Love, she said, about the microscope ...’ ‘Next time, eh?’ said Dad.

They looked at Colin.

Colin looked at them.

He could hear Luke in the lounge, shooting enemy planes out of the sky with a faint roar.

‘We just couldn’t stretch to one this time,’ said Mum, ‘not with you needing a new pair of good shoes and all. But don’t forget, it’s your birthday in less than five months.’

And it’s Luke’s birthday in less than two months, thought Colin bitterly. Wonder what he’ll get? A working model of the Garden Island Naval Depot with matching aircraft carriers? A trip round the world? A car?

‘They’re pretty snazzy shoes,’ Dad was saying. ‘Bloke could end up Prime Minister in shoes like those.’

‘I’ve got shoes.’ Colin pointed down to his brown elastic-sided boots. OK, they were a bit scuffed from when he’d borrowed Doug Beale’s trail-bike and the brakes had failed and he’d had to use his feet to stop, but they’d rub up with a bit of spit and chicken fat.

‘Wish we could all wear boots,’ he said, ‘but if you want people to take notice of you in this world, you’ve got to dress proper and wear decent shoes. Look at me with the Wheat Board. Luke was born on the Sunday, I got the shoes on the Monday, landed the job on the Tuesday arvo.’

Dad grinned and gave Colin a pretend punch in the guts. Colin tried to smile but his face felt like uncooked Chrissie pud.

Mum looked at him closely, concerned.

‘Love, is there anything else?’

Colin was still trying to work out how to explain without sounding like the one thing Dad hated (a whinger) when they heard the thump from the lounge.

Two Weeks With The Queen is available in bookshops and libraries in Australia, New Zealand, the UK and elsewhere, and online:

The audio track on this page is an excerpt from the Bolinda Audiobook Two Weeks With The Queen, read by Morris Gleitzman. Buy it online: