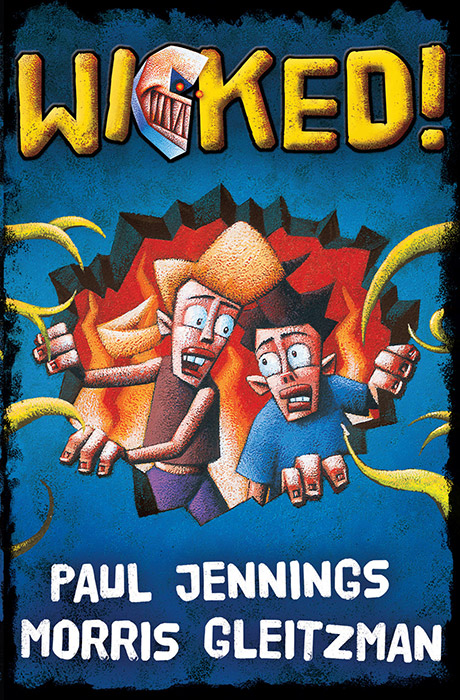 They all reckon I’m a worm.

I could tell from their faces as I ran out of the church. And from what they were saying.

I didn’t blame him. I’d probably think the same if I saw a kid do what I’d just done. Ruin her own dad’s wedding. Leave a church in uproar and a bride in tears and a minister in shock.

I wish Dad had listened all those times I tried to talk to him.

But parents don’t listen when love’s made them dopey. You just have to go along with their mad plans and hope everyone doesn’t end up in the poo. That’s what I was telling myself this arvo in church while Mrs Conti from the cake shop was playing ‘Here Comes the Bride’ on the organ.

‘It’ll be okay,’ I said in my head as Dad and Eileen stepped up to the altar. ‘We can get through this. Dad’s a really good dad even though his brain has turned to confetti, and Eileen’s not a bad person even though she does dribble a bit when she loses her temper. We’ll be right.’

I wanted to believe it heaps. But it was no good. My neck was hurting. I always get neck tension when I try and lie to myself.

I thought a curried-egg sandwich might help. I reached for the one next to me on the pew, the one I’d pinched from the caterers when we’d dropped into the Scout Hall on the way to the church to check that the glitter ball had arrived for the reception.

I hoped the bread hadn’t gone too hard in the heat. Rev Arnott’s voice was pretty quiet and I didn’t want to disrupt the ceremony with crunching. I lifted the sandwich to my mouth.

There was a slug sitting on the bread.

It was more of a worm than a slug, slimy and sort of veiny. I’d never seen one like it before, and Dad’s a shearer so I’ve seen lots. You wouldn’t believe some of the things that crawl out of sheep’s bottoms.

I glared at it and went to knock it off. That’s when I saw Rory glaring at me.

‘She’s your step-sister,’ Eileen had hissed to Rory when we got to the church. ‘Sit next to her.’

Dad had taken me to one side and given me a pep talk.

‘Dawn,’ he’d said, squeezing my shoulders. ‘I know it’s not easy, but we’ll all feel more comfortable with each other once we’re living together and getting to know each other better.’

I opened my mouth to remind Dad that Rory and me have known each other for eight years and he’s hated my guts for five and I’ve been going off him in a big way for at least four and a half.

Then Mrs Conti deafened us with the organ, and the wedding started.

We struggled over the sandwich.

‘The worm’s mine,’ grunted Rory.

He let go of the sandwich and grabbed the worm.

I chewed my sandwich angrily. How’s anyone meant to like a person who keeps worms as pets? Specially when that person’s a year older than you and is meant to be setting a good example.

Rory put the worm into a tin.

I stared. Inside the tin was the little troll that Rory takes everywhere with him. The one with the wooden body and the dried apple for a head. I try not to make jokes about it ’cos his dad sent it to him and it’s the only present he’s had from his dad for ages.

The troll’s shrivelled-up apple head had been dry and dead. Now it was alive. With worms. They were slobbering all over it and wriggling into the mouth and writhing out of the eyes.

It was worse than anything I’d seen on a sheep, even in nightmares.

I looked at Rory.

He wasn’t gagging or looking revolted or anything. He was staring at the worms, fascinated.

Then I saw something even more horrible.

It was my tin. My Milo tin. The one Mum had give me to keep pencils in.

I couldn’t believe it. Rory had taken it from my room without asking. The last thing Mum had given me before she died. And he’d put slimy slobbery revolting worms in it.

I felt rage uncoiling inside me. Hot tears stinging.

In the distance Rev Arnott was saying that stuff about how if anyone had a reason why these two people should not be joined together in holy matrimony, speak now or forever hold your peace.

Before I knew it I was on my feet.

‘I have,’ I shouted. I heard the pews creak as everyone stiffened. I could feel everyone’s eyes on me.

‘We all hate each other,’ I said. My heart was pounding in my ears. Dad’s mouth was wider than a sheep chute. ‘Not Dad and Eileen,’ I continued, ‘cos they’ve got sex, but the rest of us.’

Eileen’s face was crumpling and Rev Arnott was clinging to the altar. I ploughed on.

‘We pretend we like each other, but we don’t. You should see Rory go off when I catch him using Dad’s razor to scrape the fluff of his socks. You should see Dad when Rory has a nightmare and gets into bed with Eileen. You should see Eileen when I make friendly jokes about her bottom exercises.’

‘Thank you, Dawn,’ croaked Rev Arnott. ‘Why don’t we finish the ceremony and have a family talk afterwards.’ I turned to appeal to the other guests. Rows of open mouths and big eyes. I pointed at Rory.

‘I try to be friendly with him and he lets his rat poo in my underwear drawer.’

‘Dawn,’ roared Dad, storming towards me, ‘sit down.’

‘Second marriages never work,’ I yelled. ‘Specially when she’s more educated than he is and her son sneaks into his daughter’s room and takes precious things.’

I grabbed at my Milo tin but Rory hung on and the tin spun out of our hands and crashed onto the tiles. The apple head bounced across the floor. Worms slithered everywhere.

I turned and ran out of the church. Dad followed for a bit, shouting, then gave up. I wasn’t surprised. Eileen’s been more important to him than I have for about a year now.

I suppose I was pretty dopey coming here to the old bus ’cos Dad knows it’s where I always come when want to be close to Mum. When the ceremony’s over he’ll know where to find me.

In fact I can hear someone crashing through the bush now.

Whoever it is, I’m history.

If it’s Dad, he’ll kill me for ruining his wedding, and if it’s Rev Arnott to tell me I’m forgiven, I’ve still got to live with Worm Boy.

So either way my life’s over.

Wicked! is available in bookshops and libraries in Australia and New Zealand, and online:

The audio track on this page is an excerpt from the Bolinda Audiobook Wicked!, read by Stig Wemyss & Kate Hosking. Buy it online:

AUS
NZ
USA
Back
to the Wicked! Book page
Home