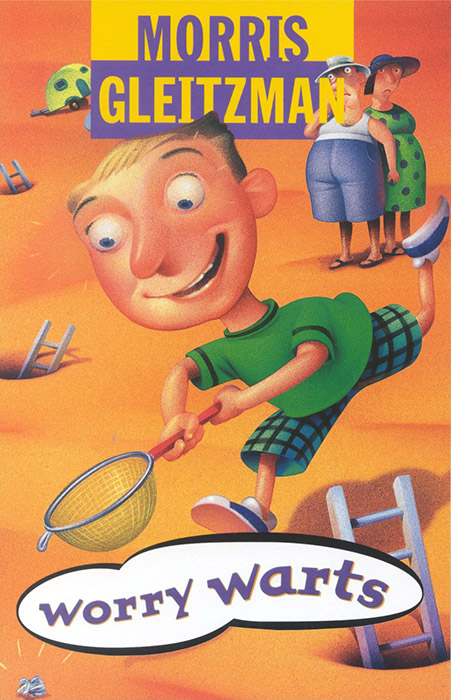 The trouble with tropical paradises, thought Keith as he sprinted out of the school building, is that everyone’s too relaxed.

He swerved to avoid a year four kid strolling along sucking a mango, leaped over a group of year threes sprawled under the palm trees swapping shells, and glanced at his watch.

Thanks a lot, Mr Gerlach, thought Keith bitterly. There ought to be a law against teachers being that relaxed. Yakking on for thirteen minutes after the bell. Couldn’t he see when a person’s guts were in knots because a person was running out of time?

Keith hurtled out of the school gate, skidded to avoid a year five kid trying to crack a coconut with a recorder, and sprinted along the dusty street towards the shops. He glanced at his watch again.

Would it be enough?

He felt the knot tightening in his guts.

Calm down, he thought. I’ll be OK as long as Mrs Newman in the post office doesn’t start yakking on about her grandson.

Mrs Newman in the post office started yakking on about her grandson.

‘Only seventeen months old,’ she said to Keith, ‘and he can say prawn.’

Pick up the savings book, thought Keith. Pick it up.

Mrs Newman picked up Kelth’s savings book from the counter.

‘Gee,’ she said, looking at the withdrawal slip, ‘thirty-eight dollars. Are you sure you want to take all that out in one go?’

No, thought Keith, I want a one-cent coin every Friday for the next fourteen thousand years.

‘That only leaves one dollar and twenty-seven cents in your account,’ said Mrs Newman.

‘Must be for something important, thirty-eight dollars,’ said Mrs Newman.

‘That’s good,’ she said, ‘cause it’d be a shame to take out thirty-eight dollars and just fritter it away.’

Keith looked up at the clock again. Two hours and forty minutes left.

Oh no, thought Keith. Please don’t ask me how I’m liking Australia. Not again. I haven’t got time.

‘How are you liking Australia?’ asked Mrs Newman.

‘Fine thanks,’ said Keith, making a mental note to write to the council and ask when Orchid Cove would be getting an automatic teller machine.

Mrs Newman wrote a couple more numbers, then stopped and looked up again. ‘Tell your mum and dad I’m sorry I couldn’t get in for my fish and chips yesterday, but Gail had to get her feet done and I had Shaun and Alex so we had baked beans. How are your mum’s feet?’

‘The trouble with North Queensland,’ said Mrs Newman, ‘is that your feet swell up.’

The trouble with North Queensland, thought Keith, is that everyone’s too friendly.

He glanced at his watch.

No need to panic, he thought. I’ll be OK as long as there’s not a queue in the hardware store.

Keith stood in the queue in the hardware store and started to panic.

He was running out of time.

Relax, he told himself. It’s only a short queue, just Gary Murdoch and his dad. They can’t need that much hardware cause they only moved into their new house three weeks ago.

‘Tap washers,’ said Mr Murdoch to the assistant. ‘You wouldn’t credit it. Brand new place, all the taps are dripping.

Kelth’s heart sank. Gary had been boasting all week in class about how his new house had twenty-seven taps. This could take ages.

Gary and Mr Murdoch both turned round.

‘G’day Keith,’ said Gary. ‘Dad, this is Keith Shipley, the kid I was telling you about.’

‘G’day,’ said Mr Murdoch, looking down at Keith with a grin. ‘You’re the bloke dragged his parents out here from Pommyland to cheer ’em up, right?’

‘Only after you burnt half the street down but, eh?’ said Gary.

‘It was just one fish-and-chip shop and it was an accident,’ said Keith, hoping the dripping tap in Gary Murdoch’s ensuite bathroom flooded his bedroom and made his Walkman go rusty.

‘Has it worked?’ asked Mr Murdoch. ‘Have they cheered up?’

‘There,’ said the assistant, scooping a pile of washers into a bag, ‘twenty-seven.’

Mr Murdoch ignored him. He looked hard at Keith. ‘Bowls,’ he said. ‘Get ‘em to join the bowls club, that’ll cheer ’em up. And if they’re having a house built, tell ’em to watch the taps.’

The trouble with tropical paradises, thought Keith, glancing at his watch, is that everyone’s too helpful.

Keith sprinted out of the hardware store, paint cans thumping together in his school bag.

The clock on the war memorial across the street said eight minutes past eleven. Keith stared. Then he remembered it had been wrong ever since a coconut had hit it in the cyclone.

He looked at his watch. Nineteen minutes to four. Two hours and twenty-four minutes left.

He should just make it.

As long as Mum and Dad didn’t see him.

Keith decided he’d better not risk going too close to the shop so he ran across the road, through the fringe of palm trees and onto the beach. He ran along the soft sand, trying to look like a tourist out for a jog with a couple of tins of paint in a school bag.

He glanced through the palm trees at the shop.

Even at that distance, Keith could see that Dad’s mouth was droopier than a palm frond and that Mum’s forehead had more furrows in it than wet sand when the sea was a bit choppy.

Poor things. Stuck in a fish-and-chip shop all day in this heat. Anyone’d get a bit irritable standing over a fryer all day with this poxy sun pounding down nonstop.

The trouble with tropical paradises, thought Keith as he ran on along the beach, is that there’s too much good weather.

He went back up to the road and crossed it at the spot where the bus from the airport had dropped them four months earlier.

He remembered Mum and Dad’s faces, aglow with huge smiles as they saw Orchid Cove for the first time.

All they need is a bit of cheering up again, thought Keith as he sprinted towards the house. Which is exactly what they’ll get when they arrive home in two hours and twenty-one minutes.

Worry Warts is available in bookshops and libraries in Australia and New Zealand and elsewhere, and online everywhere.

The audio track on this page is an excerpt from the Bolinda Audiobook Worry Warts, read by Morris Gleitzman. Buy it online: