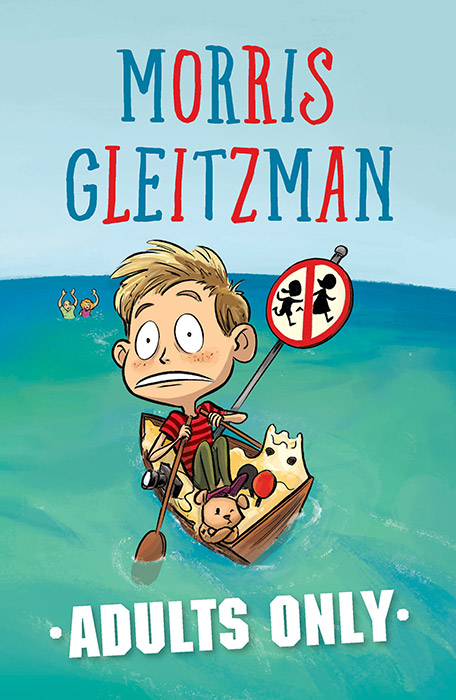 Jake gripped his bat and stared across the ping pong table at Crusher.

Crusher stared back, not moving a muscle. Or a tattoo. The scar on the side of Crusher’s face didn’t even twitch.

The pine trees towering over them creaked with nervous tension.

Jake kept his expression blank so Crusher couldn’t see what he was thinking.

Hit this one back.

It’s not ping pong if you don’t hit it back.

Crusher’s eyes were black and dull.

Poor bloke, thought Jake, Must feel awful, being slaughtered by a kid.

Jake crouched over the table and did the gentlest serve he could, straight at Crusher’s furry tummy.

He held his breath.

So did the seagulls hovering overhead.

So did the crabs watching from the rocks.

For a second the ball looked as though it was heading for the centre of Crusher’s bat. Then a breeze wafted in off the sea and the ball started to curve away.

‘Go for it,’ yelled Jake desperately.

He knew that wasn’t fair. You shouldn’t shout things like that in ping pong. Not when you were playing with someone like Crusher.

The ball drifted past the edge of Crusher’s bat and plopped onto the sand.

So did the pine trees.

Jake’s insides felt heavier than all the rocks and boulders on the island put together. He could hardly bring himself to tell Crusher the score.

‘Twenty-one nil,’ he said. ‘That’s forty-seven games to me and none to you.’

Jake tried not to show how frustrated he was feeling as he headed to the other end of the table to console Crusher.

On the way Jake overheard a crab talking to a friend.

Jake turned and glared down at the crab.

‘Crusher’s not just any teddy bear,’ he said. ‘Crusher’s a tough, fearless adventurer and he happens to be my best friend.’

‘Oh yes, I can see that,’ said the crab. ‘The minute I saw you humiliate him forty-seven games to nil I knew he was your best friend.’

Jake wanted to point out to the crab that he’d tried to make things as fair as possible. He’d given Crusher a bat in each paw. And he’d done all Crusher’s serves for him, even though it had been really hard work getting back to the other end of the table to return them.

But saying that stuff out loud would hurt Crusher’s feelings, so instead Jake muttered, ‘I just wanted to play ping pong like a normal kid.’

‘Oh yes, right,’ said the crab. ‘It’s very normal to have your ping pong opponent stuck to the other end of the table with sticky tape.’

Before Jake could reply, he was startled by a loud squawk.

He turned and saw a large seagull diving at Crusher.

The seagull clamped Crusher’s head in its beak and beat its wings. There was the sound of tearing sticky tape. Suddenly Crusher wasn’t stuck to the end of the ping pong table any more. His furry face was squeezed out of shape into an agonised silent scream. Jake saw the stitches pop in Crusher’s face scar and fluffy stuffing spill out of the open wound.

Jake flung himself at the seagull, but it was too late. The seagull was already in the air, shooting upwards. Crusher hung from its beak, sticky tape and ping pong bats dangling at the ends of his furry arms in a helpless farewell.

He raced along the beach, hoping the seagull would land and he could wrestle Crusher free. But the seagull kept flying. Soon it was a dot in the sky over the ocean, heading for the horizon.

When the dot had vanished, and Jake couldn’t shout any more, he collapsed onto the sand.

His only friend was gone. He was alone, a boy on a desolate rocky island in the middle of the ocean. Just him and a bunch of sarcastic crabs.

He blinked a few times.

Mum was looking down at him. Behind her was his bedroom ceiling. He could feel Crusher’s furry foot in his ear.

Relief flooded through him like a tidal wave of ping pong balls.

He was in bed. He’d been asleep. It had all been a dream.

‘You OK, love?’Mum was saying. ‘You looked like you were having a nightmare.’

Still blurry with sleep, he gave Crusher a hug in case Crusher had been having the same dream.

‘Do you want to talk about it?’asked Mum.

Jake did, but he needed to wake up first. He squinted in the morning light pouring in through his open door. Outside he could hear the rumble of waves, the creaking of pines, the squawk of seagulls ...

Suddenly his warm happy glow vanished. His insides started aching and it wasn’t just that he urgently needed to pee.

It hadn’t all been a dream after all.

The ping pong and seagull bits had been, but the island hadn’t.

The island was real.

Mum was looking at him, concerned.

‘Jake,’ she said, ‘Aren’t you getting a bit old to be sleeping with a teddy?’

Jake realised he was still hugging Crusher. Hot-faced, he pulled away.

‘He’s not a teddy,’ he said. ‘He’s a friend substitute. It’s what kids have when they live on remote islands hundreds of kilometres away from other kids. Ask any psychiatrist.’

The second he’d said it, he wished he hadn’t. Specially when he saw the sadness in Mum’s face.

‘It’s not dirt,’ said Jake. He pointed to Crusher’s furry biceps. ‘They’re tattoos. That one’s a skull with a snake coming out of the eyes, and that one’s a lobster with a machine gun.’

Suddenly Mum was hugging him.

‘I’m sorry,’ she whispered, and he know she wasn’t just talking about calling Crusher grubby. She was talking about the island and their whole lives.

Trouble was, it didn’t change anything.

His life was still a nightmare and neither Mum nor Dad could do anything about it.

Adults Only is available in bookshops and libraries in Australia and New Zealand, and online:

The audio track on this page is an excerpt from the Bolinda Audiobook Adults Only, read by Morris Gleitzman. Buy it online: