Listen to Morris read Chapter 1 (This audio has been abridged in places so it doesn’t exactly match the text. Sorry.) 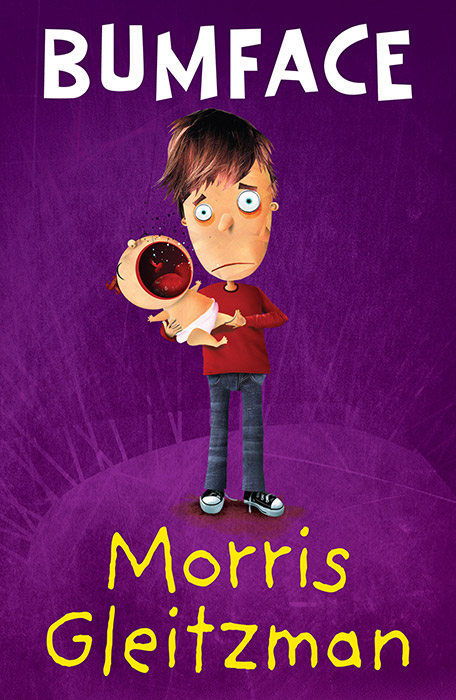 ‘Angus Solomon,’ sighed Ms Lowry. ‘Is that a penis you’ve drawn in your exercise book?’

Angus jumped, startled, and remembered where he was.

Ms Lowry was standing next to his desk, staring down at the page. Other kids were sniggering.

Angus felt his mouth go dry and his heart speed up. For a second he thought about lying. He decided not to.

‘No, Miss,’ he admitted, ‘it’s a submarine.’ Ms Lowry nodded grimly. ‘I thought as much,’ she said. ‘Now stop wasting time and draw a penis like I asked you to.’ She pointed to the one she’d drawn on the blackboard.

He took a deep breath.

‘Excuse me, Miss,’ he said, ‘I wasn’t wasting time. I was working on my pirate character for the school play. He lives in a submarine and –’

He felt something prod his arm. It was Scott Mayo’s ruler.

‘Angus Solomon,’ yelled Ms Lowry. ‘What did you just say?’

Trembling, Angus wondered if he could explain without dobbing in Scott.

A gasp ran through the class. Ms Lowry looked stunned. Oh no, thought Angus, horrified, she thinks I mean her.

Ms Lowry took a very deep breath. Her eyes narrowed and she looked dangerously stressed. Angus wondered if he should suggest she loosen the collar of her blouse. He decided not to risk it.

‘You have five minutes to get this diagram into your book,’ said Ms Lowry very quietly. ‘If I hear another word about pirates before tomorrow, Angus Solomon, you’re out of the school play.’

Angus tried to keep his mind on sex.

It wasn’t easy. While Ms Lowry was busy telling off a kid up the front for putting a face on a testicle, Russell Hinch started getting laughs from his mates by showing them what he’d drawn in his exercise book. Angus caught a glimpse and felt his face go bright red.

Angus knew what they were meant to be even before he heard Russell’s whisper.

‘Angus Solomon and his girlfriend.’

Not more joking and sniggering behind his back. Not more rumours spreading round the playground quicker than head lice. Rumours that were completely, totally, one million per cent untrue.

Angus pretended he hadn’t heard. He pretended to be interested in Ms Lowry’s diagram of the human reproductive organs on the blackboard.

Sex, he thought angrily. Sex, sex, sex. It’s all we do in class these days. Why can’t we do something interesting like geography?.

Then he heard quiet sobs coming from behind him. He turned round. Stacy Kruger’s face was crumpled and tears were dripping onto her exercise book. She looked so upset Angus couldn’t help feeling sorry for her, even though she was always flicking things at him.

He leant back to speak to her, then stopped. Russell Hinch and his mates were watching. That’s all I need, thought Angus. Russell Hinch spreading rumours I’ve got two girlfriends.

Angus reminded himself that talking to girls wasn’t something he should be doing anyway. Not now he’d been given one of the main parts in the school play. Tough, ruthless, professional pirates didn’t talk to girls. The audience wouldn’t believe he was a pirate for a second if they knew he’d been talking to girls.

He looked at Stacy again. Her face was a wet mask of misery. Poor thing. He knew how she felt. He’d felt pretty weird himself the first time he’d found out what people had to do to make babies.

Stacy didn’t seem to hear him. She sobbed some more.

‘It doesn’t hurt them or anything,’ Angus whispered. ‘My mum’s always doing it.’

‘Angus and Stacy,’ yelled Ms Lowry, ‘what is going on?’

Angus stared at her. So did Ms Lowry.

‘I didn’t know he was missing till just now,’ sobbed Stacy. ‘His beeper should have gone off and when it didn’t I opened my pencil case and he wasn’t there.’

Angus held his breath, waiting for Ms Lowry to explode.

‘Stacy,’ said Ms Lowry quietly. ‘Are you talking about a Tamagotchi?’

Stacy nodded. ‘If it doesn’t get fed, it’ll die,’ she sobbed. ‘And its battery could run out.’ Miss Lowry exploded. ‘I’ve just about had it with this class today,’ she yelled. ‘Who took Stacy’s Tamagotchi?’

Angus looked around. Nobody looked guilty, not even Renee Stokes and Julie Cheng, who’d been going on for weeks about how they wished they had one.

‘Right,’ shouted Ms Lowry. ‘Everyone outside for a bag search.’

Angus blinked. A bag search? For a Tamagotchi? Kids weren’t even meant to bring Tamagotchis to school.

He hadn’t. The other kids were heading out to the pegs.

Fear stabbed through him. Not bags. Please not bags.

He hurried after Ms Lowry. ‘Shouldn’t we do pockets first?’ he asked desperately.

Angus stood miserably by his peg and prayed that the Tamagotchi would turn up before Ms Lowry got to his bag.

For a heart-stopping second he thought he saw it when Renee Stokes emptied out her bag, but it was just a plastic pencil-sharpener.

Then he thought he spotted it among the supermarket trolley wheels Russell Hinch tipped out of his bag, but it was just a box of matches.

For a desperate moment Angus thought of telling her that his bag zip wouldn’t open because it had been struck by lightning. Then he remembered lightning didn’t strike indoors.

Angus emptied out his bag.

He watched Ms Lowry as she studied his things on the floor. She breathed an exasperated blast of air through her teeth when she saw the Tamagotchi wasn’t there.

Stacy gave a sob and her face crumpled again.

Angus didn’t even bother looking at Russell Hinch’s face. He knew exactly what expression would be on it. As Russell stared gleefully at what was there.

A fluffy pink teddy with a yellow bow round its neck.

‘Aw, sweet. Bumface has got a prezzie for his girlfriend.’

I’m on a pirate submarine, he thought, at the bottom of the deepest part of that really remote bit of ocean the other side of Tasmania.

But even there he could still hear kids sniggering.

Angus sprinted across the playground, looking frantically at his watch.

Teachers shouldn’t be allowed to have bag searches so close to the bell, he thought bitterly, not when people have to pick up younger brothers.

Leo was sitting by the infants gate, poking at something in the dust.

Leo looked up and grinned. ‘This spider just did a poo,’ he shouted.

Angus sighed. Why did five-year-old boys have to be so loud?

‘Leo,’ he muttered, crouching, ‘how would you like it if spiders went round yelling when you did a poo?’

Leo looked up at Angus, hurt. ‘You told me to always tell the truth.’

Angus pulled him to his feet and dusted him off.

‘I also told you something about spiders, didn’t I?’

Angus grinned and gave Leo a hug. ‘I told you not to touch them,’ he said, picking bits of fruit out of Leo ‘s hair, ‘because some of them are poisonous and if they bite you you’ll turn black. Though that seems to be happening already.’

He brushed dust off Leo’s neck. How did five-year-old boys get so dirty?

Angus turned. Russell Hinch stood grinning with a gang of kids. Scott was with them.

‘We’re going down the playground for some pirate practice,’ said Scott. ‘Wanna come?’

Russell nudged Scott. ‘Told you,’ he grinned. ‘Bumface has got a date.’ Scott grinned too. Russell turned to Angus. ‘Hope your girlfriend likes her prezzie. She might give you one back.’

Angus watched Russell do his revolting kissy lips while the rest of them sniggered, including Scott.

Suddenly he forgot he was meant to be setting a good example to Leo. He went over and stood on tiptoe and stuck his face dose to Russell’s. Russell looked startled.

Panting, he glared at Russell, who took a nervous step back.

Russell and the others stared at Leo, then fell about.

Angus watched them laughing, his heart thumping and eyes pricking. He opened his mouth to explain, then closed it again. Instead he grabbed Leo and marched him away down the street.

‘Ask her to lend you a dress for the school play,’ yelled Russell.

Scott and the other kids chortled and Russell made kissy noises. Angus walked on, trying not to listen but hearing every smooch.

Leo looked up at him.

‘I told the truth,’ he whispered, ‘like you said.’

Leo squeezed Angus’s hand. ‘You were brave,’ he said.

‘Thanks,’ said Angus with a sigh.

He wished he was brave enough to tell the truth himself. The truth about his life. But only little kids were that brave.

Bumface is available in bookshops and libraries in Australia, New Zealand, the UK, and online:

The audio track on this page is an excerpt from the Bolinda Audiobook Bumface, read by Morris Gleitzman. Buy it online: