Listen to Morris read a bit of Funny Stories 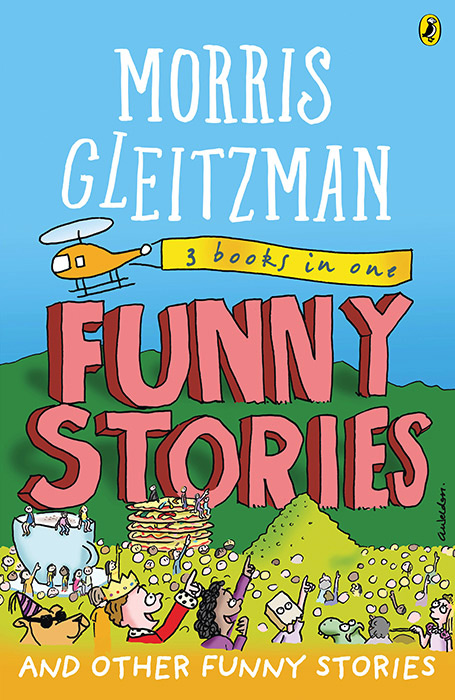 Zac was in big trouble.

So much trouble it isn’t funny, he thought to himself miserably.

Zac tried to stay calm. He tried to concentrate on sprinting as fast as he could along the street towards school. He tried not to think about Mr Malone’s threat.

At last week’s assembly, Mr Malone had stood in front of the entire school and worked himself up into a full-scale Malone cyclone, complete with rain storms of saliva splattering the front rows of kids.

‘Punctuality,’ he’d said. ‘It’s an old-fashioned word that means presenting yourself promptly. In this school, punctuality is pathetically poor.’

Half the school looked guilty. The other half looked like they wished they had an umbrella.

‘I’m a patient principal,’ Mr Malone had stormed. ‘But from this point in time, each and every one of you will be punctual or pay the price.’

Everyone, including Zac, knew exactly what Mr Malone meant when he said that.

Paying the price didn’t just mean losing a house point or having a parent called to the school. Paying the price meant Mr Malone would put a lot of effort into thinking up a horrible punishment, just for you.

But he knew groaning wouldn’t save him.

He dashed across the teachers’ carpark towards the school hall.

Maybe, if he was fast and very quiet, there was a tiny chance he could get to his class row without being seen. Please, Ms Patel, Zac begged silently, don’t have done roll-call yet. Please, Mr Malone, have your back to everyone, showing them stuff on the overhead screen. Sports results or the addresses of umbrella shops.

Since Mr Malone’s threat, nobody had been late. It was an amazing achievement. Mr Malone seemed a bit disappointed.

The whole school knew Cyclone Malone was waiting for somebody he could make an example of. A scapegoat. A fall guy. Some clown, as Zac’s friend Marty had put it, who was tired of living.

Zac reached the school hall. He stood outside the door and tried to stop gasping for breath.

Then, as slowly and carefully as he could, praying the door wouldn’t make any noise, he pushed it open.

The door gave a long and very loud squeak. Zac froze, but it was too late.

Everyone in the hall was turning and looking at him. Except Mr Malone. He didn’t need to turn. He was standing at the front, already staring across all the heads. Directly at Zac.

Zac stepped miserably into the hall.

Behind him, as it closed, the traitor door gave another long squeak. A few kids sniggered softly. Mr Malone didn’t yell at them. Just smiled at Zac.

‘Proceed up here,’ he said.

I’m history, Zac thought as he slowly climbed the steps onto the stage and stood silently in front of Mr Malone.

‘I was just pointing out,’ said Mr Malone, ‘how sometimes we can’t help being late. And how that’s perfectly fine when there’s a proper reason. And the reason is explained fully and promptly. In a permission note from a parent.’

‘Do you have a permission note from a parent, Zac?’ he said.

Zac shook his head. And not just to get the drops of Mr Malone’s saliva off his nose.

‘Mum and Dad had already gone to work,’ said Zac, ‘when it happened.’

There was a silence. Zac could feel about three hundred pairs of eyes watching him.

‘When what happened?’ said Mr Malone.

Zac knew it wasn’t going to sound good. But he reminded himself about something he’d read in a book. About truth being the best defence.

‘When Woody fell into the toilet,’ he said.

A few kids laughed. But not loudly. It was more like half-smothered spluttering by people who weren’t sure if they were allowed to laugh.

‘How does a person fall into a toilet?’ said Mr Malone.

‘He got run over,’ said Zac. ‘When he was little. By a cheese grater. It fell off the table and rolled over him.’

The laughter was louder now.

Zac would have told everyone to shut up if he hadn’t been so concerned about how angry Mr Malone was starting to look.

‘I fished Woody out of the toilet,’ said Zac, ‘and dried him on a towel. But he was shivering badly and Mum had taken her hair dryer to work so I put him in the oven.’

All around the hall, kids were laughing and giggling so much that some of them were squeaking louder than the door.

Zac tried to ignore them.

‘I just put Woody in for a couple of minutes,’ he said. ‘On very low heat. But the oven door jammed and I couldn’t get it open. Then I saw what was in the oven with Woody. On the same shelf. It was terrible. Mum must have put it in there so it would finish drying because the tea towel gets ripped if you try to rub it dry.’

Mr Malone was glaring at him.

Zac thought that perhaps it was because he wasn’t making himself clear.

‘The cheese grater,’ said Zac. ‘Woody was panicking. I thought he was going to have a heart attack. So I smashed the glass in the oven door with the sandwich toaster.’

Waves of laughter echoed around the hall. Some kids were almost falling off their chairs.

Zac glared at them.

You wouldn’t be so amused, he thought bitterly, if you could see poor Woody now. Huddled in his cage at home, trying to pick bits of glass and toasted sandwich out of his fur and brooding about why the cheese grater and me ganged up on him.

Out of the corner of his eye, Zac saw Mr Malone’s lips moving.

The laughter was too loud for Zac to hear what Mr Malone was saying, but it didn’t matter. He knew. So did everyone else in the hall.

The laughter stopped as suddenly as if someone had switched it off.

Which, in a way, was exactly what Mr Malone had done. By spraying at Zac the four words that every student dreaded.

‘See me at lunchtime.’

Funny Stories is available in bookshops and libraries in Australia and New Zealand, and online:

AUS
NZ
Back
to the Funny Stories Book page
Home