Morris Gleitzman - The Other Facts Of Life - Chapter 1 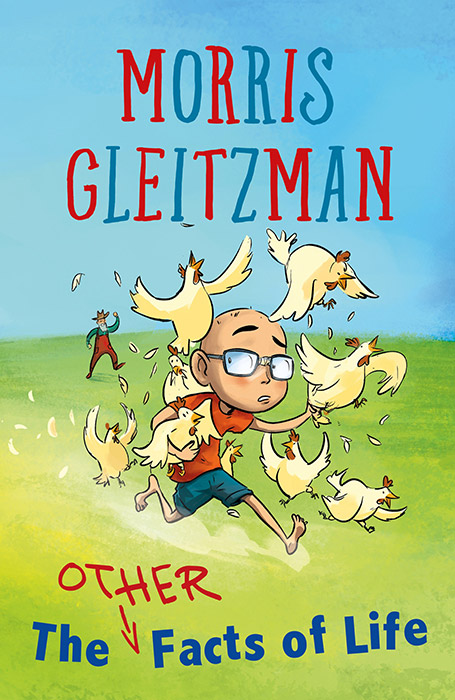 It was a beautiful Saturday morning but inside the bathroom things weren’t so good.

Ben stared at himself in the mirror. The Feeling was coming on again. It was coming every day now, sometimes more than once a day. And it was getting stronger.

Ben had never felt a feeling like this in his life.

He needed answers. He stared into the mirror at the plump, pink flesh sitting all over his body. It had been with him for a while and he thought he knew it pretty well. Bruised from footy. Scraped from bike falls. Freckled from eating curry.

But now it was asking him questions he’d never heard before. And he needed answers.

Outside the bathroom Ben’s mother wanted answers too. Pressing her ear to the door, she held her breath. What was he doing in there?

Di Guthrie had a quick vision of what she herself was doing and felt guilty. Sneaking around the house listening at doors wasn’t the way they usually did things in this family. But Ben had been shutting himself in there at least once a day for the last two weeks. Sometimes twice. On top of the normal wees, poos and showers.

One thing was certain. He wasn’t retiling the floor. Not after what she’d just found in his room.

Outside the house, the bush suburb was auditioning for a margarine commercial. Sunlight filtered through the tall gums, bathing the big new houses in golden light. Swimming pools glowed through brushwood fencing. Lawns sparkled under their whispering sprinklers.

On every side Substantial Pieces of Real Estate sat around increasing in value. Nobody was getting mugged, all the drugs were safely stored in generously proportioned bathroom cabinets, the only hints of unemployment were a couple of discreet For Sale signs.

In Crescents, Closes and Places, remote-controlled triple garage doors whirred open. Golden-haired kids zipped up their leather moto-cross suits, kick-started their shiny Yamahas and Kawasakis and roared away into the bush in clouds of blue smoke and happy laughter.

Dad stood on the driveway in front of the house of his dreams not seeing a brick of it.

He spread waves of soapy water from the Swirl-On over his late-model airconditioned Fairlane without seeing that either.

Nor was he seeing the Mazda hatchback, the eight-metre cabin cruiser on its trailer, the four surf skis or the four trail bikes all lined up across the driveway, all as yet untouched by soapy water.

What he was seeing was meat. Lamb, beef and pork. Dressed, chilled and hanging in rows that stretched away as far as his inner eye could see.

This wasn’t as much of a problem as it could have been because Ron Guthrie was a butcher. And the voice coming from the car radio was reading out the most important items of information in Ron’s day. The abattoir prices.

Ron Swirled On, his work-weary face furrowed with concentration, oblivious to the soapy water that splashed onto his footy shirt and shorts, onto his paunch and his pale legs.

On neighbouring driveways other tired, overweight men in ironed football gear soaped down their own lineups of cars, boats, bikes and other luxury hardware. Those that weren’t gliding hover-mowers over already manicured lawns. Or running power clippers over immaculate hedges.

Several of them looked over as Ben’s mother hurried out of the Guthrie house and down the driveway to her husband. Trim and tanned in her tennis dress, her pretty, well-cared-for face furrowed, Di didn’t give them a glance. All she cared about was the thing she held in her hand.

A magazine. Glossy. With a naked woman on the front. Well, almost naked. The magazine, National Geographic, showed on its cover a statuesque African tribeswoman bare from the waist up, her breasts half-obscured by strands of tribal jewellery.

Di held the magazine out to Ron. He glanced at it distractedly, ears still tuned to the radio, mind still juggling carcasses and prices per kilo.

‘Mmm ... very nice,’ he murmured absently. ‘Necklace’ll go with your Mexican earrings.’ Di thrust the magazine under his nose. She tried to sound calm.

At that moment the voice on the radio announced a dramatic fall in the price of pork. Ron winced the wince of a man with a freezer full of porcine stiffs bought at last week’s record prices.

‘He’s in there again now. When a twelve-year-old boy starts shutting himself away on sunny Saturday mornings with videotapes and photos of naked women it can only mean one thing.’

Ron, in the process of weighing a special on pork sausages against a pork chop promotion, became dimly aware that Di was waiting for him to say something.

Di felt a surge of irritation as she realised the most important moment in her son’s life was coming second to a bunch of dead pigs. She leant forward and whispered fiercely.

Di could hold it in no longer.

Her shout echoed down the street.

Ron snapped upright, soapy water arching through the sunlight and pattering onto his thinning scalp.

The washers, mowers and clippers for several houses around looked up in alarm. Seeing their footy shorts were not under immediate threat they bent back down to their tasks for fear of becoming involved in a Domestic.

Ron grabbed the magazine, stared at the cover and put Ben, the semi-naked tribeswoman and Di’s concern together in a flash. His stomach gave a little lurch.

Leaning past him into the car, Di turned off the radio and looked at him.

‘It’s time you had a chat with him, Ron,’ she said quietly.

Ron felt a sudden urge to go to each of his four butcher’s shops and proclaim the special on pork sausages in person. He glanced at his watch.

‘Now. He’s twelve. Jean and Barry did the birds and the bushflies with Jason months ago.’

Di put her hands on his shoulders and sharply lifted her knee to within one centimetre of his groin.

‘I did Claire, you do Ben. That was the deal.’ She stepped back, exasperated. ‘I mend his football. I tune his bike. I teach him karate. He’s been waiting years for this just so he can get to see you.’

Ron swirled the soapy water around on the car roof, feeling guilty and resentful at the same time.

‘I’ve got a business to run. If I spent all my time tuning his bike we wouldn’t be able to afford to buy him one. Besides, the bottom’s fallen out of pigs.’

Di took the Swirl-On from him. ‘The shops can wait for once.’ She pointed to the row of vehicles. ‘I’ll finish these.’

Ron felt the old panic surge through him. Never enough time. Supermarkets discounting behind his back, leaving him with windows full of stock fit only for currying. Mortgages collapsing around him. Family leaving him, bowels ravaged by tonnes of Vindaloo. He looked gloomily at his drivewayful of possessions.

‘What’s the use of owning all this stuff if I haven’t got time to clean it?’

Di slipped her arm round his waist and gave him a sympathetic squeeze.

‘Go on, Ron. Go in and sort it all out with him so he can get back out on his bike with his mates.’

On cue Ben’s mates roared past on their bikes, leaving behind them a trail of smoke, laughter and credit repayments.

Ron looked at his watch. ‘Have to be a quick chat.’

He started moving uncertainly towards the house. Di watched him go.

‘Couple of minutes should be plenty,’ she called after him with gentle sarcasm. ‘It’s only the Facts of Life.’

In the darkness of his bedroom, curtains shutting out the sunlight, Ben sat huddled in front of his TV.

A tape turned slowly in his video player.

The frenzied, pulsating beat of oriental drums filled the room.

Ben stared at the images on the screen half in fascination, half in horror.

The Other Facts Of Life is available in bookshops and libraries in Australia and New Zealand, and online: